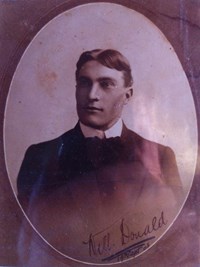 From as early as 1906 until early 1908, Donald's caricatures and cartoons were published in Adelaide papers Herald, Critic, Quiz and Gadfly (founded by A.E. Martin, also known as Peter Amos).

In 1907, he set out with Adelaide journalist Beaumont Smith to travel through Asia, America and Europe. However, he possibly got no further than Sydney. His work was published at this time in the Sydney-based Australia and Steele Rudd's Magazine in 1907, before he returned to Adelaide in early 1908. He operated a small studio in Adelaide teaching cartooning.

In 1908, he contributed to the first issue of Vumps, an Australian written and drawn comic paper. Vumps was published by Hector Lamond (1865-1947), editor of The Worker, the official paper of the Australian Workers’ Union.

In around 1909, he moved permanently to Sydney, working initially for The Star. His first work for The Sun was published in 1909. In the twenties, he was a regular contributor to the Sunday Sun 'Sunbeams' comic supplement, including a collaboration with Hal English on the strip 'Fashion Plate Fanny' (1923-1931). He drew caricatures and political cartoons for various magazines and The Daily Telegraph.

Beginning in 1921, Donald provided illustrations and cartoons for union newspaper, The Australian Worker. 8 November 1939 to 2 July 1941, he provided that paper with a weekly children's strip about anthropomorphic koalas called 'The Bluegums'. He finished work at the paper in 1944.

For a while he ran a printshop in Sydney and created large posters for hoardings advertising theatre shows.