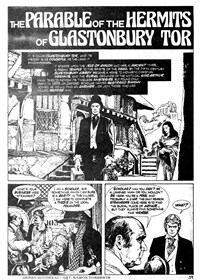 Born in Barcelona, Mora's family fled the Spanish civil war and moved to France. After Mora's father died, he returned to Spain at the age of eleven.

In 1948 Mora got a job at Editorial Bruguera as a translator and editor. His first comic script was when he took over the series 'Dr. Niebla' in Bruguera's El Campéon, with art by Francisco Hidalgo (1948-1953). In 1956, he created Spain's popular comic hero 'El Capitán Trueno' for that publisher under the pen name Victor Alcazar. The first series continued 1968, with sales peaking at 350,000 copies weekly, and was adapted into songs, a video game and a feature film (2011).

From the late 1960s, Mora wrote syndicated comics for Selecciones Ilustradas, including the western Sunday (1968-1970) and science fiction series Delta 99.

In 1956 Mora spent time in prison accused of being a freemason and communist. In 1963, he was exiled for his political beliefs. While in France, he wrote the semi-autobiographical novel Els plàtans de Barcelona (1966), the first part of a trilogy, about post-war Barcelona. The book was banned in Spain until 1972.

Mora also did the Spanish translations of Goscinny's Astérix.

Mora continued to write for Spanish comics, including science fiction series 'Dani Futuro' (1969-1975), as well as working directly for French publications, including political comic 'Les Chroniques de l'Innomé' for Pilote and a series based on the TV series 'The Persuaders' for Pif (1975). He created the science fiction story 'Gigantik', published in the Koralle magazines Super-As (France), Zack (Germany) and Wham! (The Netherlands).

In 1987, he was appointed editor-in-chief of the comics magazine Ediciones B's TBO and he resumed writing 'El Capitán Trueno' in 1989. In the 1990s, he wrote for key Spanish magazines like Zone 84 and Cimoc.