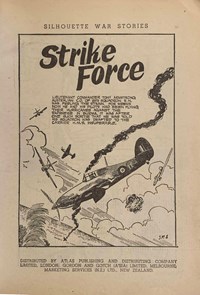 Wilkinson received a scholarship to study art at Wakefields College in Leeds UK, but left in 1941 before completing to join the navy. Toward the end of the second world war, the aircraft carrier he served on, HMS Illustrious, was damaged and repaired in Australia. Wilkinson decided to settle in Sydney and transferred to the Royal Australian Navy.

While his application was being processed, Wilkinson visited H. John Edwards and was invited to pitch ideas. His first published work was government agent 'Dusty Malone', a backup in Tim Valour Comic (probably #7, 1948). This was followed by humour strips for Meteor Publications' Radio Comics (as 'Wilky', ~1949) and KG Murray's reprint comics (as 'Wilkie' and 'Wilko', mid-1949). He is listed as assistant art editor for Meteor's Radio Comic Annual (1949), which reprinted material from earlier issues.

In 1949, Wilkinson proposed the concept for The Phantom Ranger to Frew Publications. The series launched in October as the company's first locally drawn comic and its popularity prompted Frew to publish more Australian comics. Wilkinson created 19 issues before Peter Chapman took over.

He is reported to have drawn local episodes of the main feature in Pyramid's Black X, which was predominantly reprints of Will Eisner's 'Espionage Starring Black X' from Quality's Feature Comics and Smash Comics. He also worked on backup features 'Rex Clark, Private Detective' and 'Larry Kurtis'.

In May 1950, Frew released the first issue of The Shadow created by Wilkinson. He wrote and drew 12 issues, before again handing over to Peter Chapman. Continuing to work with Frew, Wilkinson created the short-run series Planetman in ~1953 and Kid Champion in ~1954.

Around this time, he created Jetman & His Robot Temp for Transport (~1953).

In the mid-1950s, Wilkinson returned to H. John Edwards and took over from Royce Bradford the series Gimlet, adapted from stories by the creator of Biggles—another title being licensed by Edwards at that time. He also worked on issues of Edwards' Convicted Comics (~1957), some of the final episodes of The Adventures of Biggles (around ~1958), and at least one story in Treasure Trove #15 (~1960).

Among Wilkinson's last Australian comics work is various issues of Cleveland's pocket-size Silhouette cowboy, war and romance libraries, which began ~1956 and continued until the early 1960s.

After the end of the Australian comics boom, Wilkinson worked in various jobs outside the industry. In the early 1980s, he went temporarily to the UK and stayed to work for comics publisher IPC until 1987 and then DC Thomson. His specific work for those companies is not known.

Wilkinson continued working as an illustrator and taught adult art education classes until he retired in 2004.

Gimlet is often reported as starting in 1953, but the 1/- pricing suggests around 1957. An image of HMS Illustrious docking at Garden Island in Sydney in 1945 for repairs is available at https://www.awm.gov.au/collection/306649.