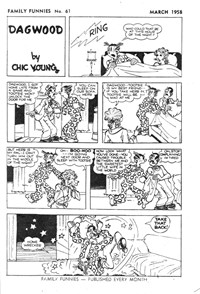 After studying art in Chicago, New York and Cleveland, Young worked for Newspaper Enterprise Association (NEA) from 1920. The first strip he worked on was The Affairs of Jane, before creating Beautiful Bab in 1922 for Bell Syndicate.

Young was employed by King Features Syndicate in 1924. He first signed the name 'Chic' in the strip Dumb Dora in 1925. He created The Family Foursome and Colonel Potterby and the Duchess.