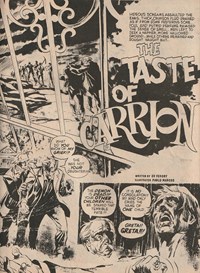 In Peru, Marcos drew caricatures for weekly political magazines while at university. During the 1960s, he worked on comic strips for the Peruvian press including 'Benito Puma' and 'James Bond'. He was one of the main artists for the El Escolar supplement of the daily Expreso and he covered major events, including the death of Che Guevara, in illustrations.

He has contributed to Heavy Metal ('Norka') and Frank Frazetta Magazine ('OM').