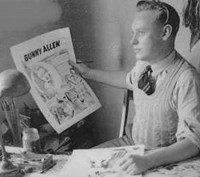 Keith Chatto was born at Kogarah NSW. His father, an accountant for Smith's Weekly, showed his son's art to work colleagues and Jim Russell invited Chatto to attend art classes in Smith's studio. He found work in the art department at Greater Union Theatres and then drew aircraft recognition charts for the the Australian Air Training Corps before enlisting for the second world war.

After returning to civilian life, Chatto had a comic strip, Destiny Scott, published in the in the mid-week children's section of the Sydney Morning Herald, starting 26 June 1946. In 1947 he produced two strips for The Australian Sunbather (Ashworth Publications).

From the mid 1950s, he worked on magazine illustrations, record sleeves and pulp novels covers, notably numerous covers for Yaffa/Page comics and magazines from the mid-1960s. He did a comic series based on the Skippy the Bush Kagaroo TV series (1967) for Magazine Management. In 1972, he created the mature 'Flame and Ash' as Joy Neill and ghosted some strips for Air Hawk and the Flying Doctors, before taking over the Sunday strip in mid-1977. He left to become a freelance film producer and cameraman.

The first Australian Phantom story 'Rumble in the Jungle' was drawn by Chatto with scripts by Jim Shepherd (1990). With Shepherd, Chatto drew two more Phantom stories, 'Return of the Singh Brotherhood' (1992) and 'The Kings Cross Connection' (1992).