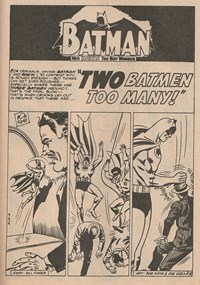 Milton Finger, known professionally as Bill Finger was an American comic strip and comic book writer best known as the co-creator, with Bob Kane, of the DC Comics character Batman, and the co-architect of the series' development. Although Finger did not receive contemporaneous credit for his hand in the development of Batman, Kane acknowledged Finger's contributions years after Finger's death. He also co-created The Joker.

He was posthumously inducted into the comic book industry's Jack Kirby Hall of Fame in 1994 and the Will Eisner Comic Book Hall of Fame in 1999. The Bill Finger Award, founded by Jerry Robinson and presented annually at the San Diego Comic-Con to honor excellence in comic-book writing, is named for him. (Biography from GCD.)