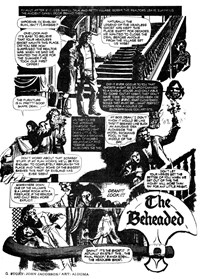 Aldomà was born in Reus Tarragona in 1935. He is a self-taught artist who worked initially in comics from the late fifties, before becoming a painter and illustrator, and then moving to sculpture.

In 1956, Aldomà began working for Selecciones Ilustradas on Lonely Rock, which brought him to the attention of publishers in the UK and he worked for a decade anonymously on pocket war comics, including Fleetway's War Picture Library, Air Ace Picture Library and Battle Picture Library, as well as DC Thomson's Commando.

Through Selecciones Ilustradas he created a few stories for Warren in the early 1970s, but his style was not well suited to horror and fantasy.

His last series was 'Los Misterios de la Jungla' with Victor Mora for the Pala Juvenile Encyclopedia (1974-1975), along with illustrations at the start of each chapter of the book. He also illustrated the horoscope section of The Papus Extra (Amaika).

Since 1975, he has focused exclusively on sculpture and is regarded as one of the most important Catalan sculptors, with work in public spaces in such as Barcelona, Tossa de Mar, Reus, Mallorca and Salou.