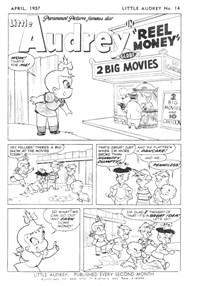 Harvey joined Harvey Comics when his twin brother Alfred (who founded the company in 1939) enlisted in the army in 1942.

He was initially art director, although he is reported to have had no artistic talent, other than a strong sense of design and skill at lettering. From April 1943 and throughout the 1950s, he was the company's editor and continued to be credited into the 1960s. in 1963, he was producer for 26 episodes of The New Casper Cartoon Show (TV Series). He reluctantly became President of Harvey Comics in 1976 when Alfred was removed by the board.

Harvey was one of the founders and initial treasurer of the Comic Magazine Association of America (CMAA) in 1954, which established and administered the Comics Code Authority. He was the organisation's vice-president and treasurer 1979 to 1980.

Harvey's birth and death dates are from IMDB.