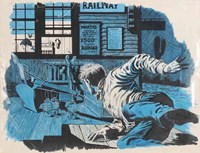 Correa moved to New York as a child, where he attended grammar school and appears to have spent most of his life. He was studying to be an architect when he was drafted on 16 September 1940 and served a private in the Coast Artillery Corps.

Correa early comics work around 1951 was influence by Alex Raymond.

Correa's most significant comics contribution was extensive adventure and western comics at Western for Dell (1953-1959), particularly its Four Color series. He is particularly known for his work on Zorro and Turok Son of Stone.

Correa subsequently moved into commercial illustration, with possibly most work not credited or identified.

He is credited for illustrations in the two volumes John Scarne's 100 More of Scarne's Magic Tricks (1963) and 100 More of Scarne's Magic Tricks (1964, Cornerstone Library, NY). He designed record covers for Nostalgia Lane, including the (non-music) recordings Pardon My Blooper! Best of the Bloopers (~1974), The Best of W.C. Fields (1978) and Sherlock Holmes: The Case of the Six Napoleons and The Case of the Norwood Builder (~1982).

Bantam Books published a line of 'Specially Illustrated Edition' reprints of war novels which might also include Correa's illustrations, although some are credited to 'Ben Correa'. Possible titles include The Hundred Days of Lt. Machorton by Ian MacHorton (1979), Commando Force 133 by Bill Strutton (1981) and General Wainwright's Story by General Jonathan M. Wainwright (1986).