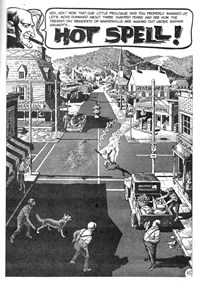 In 1939, Crandall started with the Eisner and Iger Studio. His earliest work was published by Quality, including the Ray (Smash Comics), Doll Man (Feature Comics) and Firebrand (Police Comics), which he co-created. He provided other early work for Fiction House and Atlas/Marvel, where he inked Jack Kirby on early Captain America stories. For Quality, he drew Captain Triumph (Crack Comics). In 1942 Crandall began his long run on Blackhawk (Military Comics, Modern Comics and Blackhawk), which continued until 1953.

in 1953 Crandall became a key artist at EC Comics until the company closed due to the mid-fifties anti-comics panic. He subsequently freelanced for Atlas, Marvel and Gilberton (Classics Illustrated).

In 1965 Crandall started contributing to Warren, beginning with Blazing Combat. Until 1973, he provided many stories for Creepy and Eerie, with just one in Vampirella (the first issue).

Suffering health problems, Crandall left the comics industry in 1974. He suffered a stroke and spent the rest of his life in a nursing home.