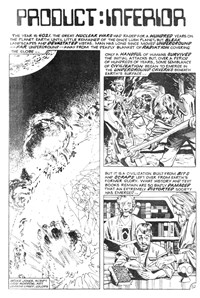 Jones started his artistic career in New York in the seventies, selling illustrations to science fiction magazines, comics, fanzines and men's magazines. He made his professional comics debut in Major Publications' Web of Horror #3 (April 1970)

In 1979, Jones formed a writing partnership with April Campbell, forming Bruce Jones Associates in 1982 and producing material for Pacific and Eclipse, including his short story collection The Twisted Tales of Bruce Jones. He wrote Richard Corben's Rip in Time (1986-1987) and provided some horror stories for DC.

In the nineties, Jones wrote the newspaper strip Flash Gordon (1990-1992), television scripts (including HBO's The Hitchhiker) and a series of thriller novels.

In 2001, he took up writing The Incredible Hulk for Marvel before moving to DC Comics in 2004. He has also worked for Dark Horse and Image.