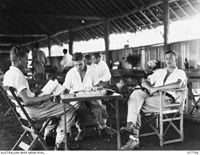 Jim Borella Swan was born in Sydney (possibly Manly) to William John and Margaret Olive Swan and grew up at 'Yalaing' in Dee Why, NSW. From the age of 10 in 1929, his writing and art contributions frequently won certificates for publication in in the 'Sunbeams' supplement to The Sunday Sun newspaper (see for example The Sun, 6 April 1930). Swan studied art with teacher Fred Leist at the East Sydney Technical College, Darlinghurst, with an exhibition of his work received well by The Sydney Morning Herald in 1938.

Swan had a cartoon published in The Australian Women's Weekly in 1936 and Smith's Weekly in May 1940, before regularly contributing cartoons to The Bulletin while in the army during (and possibly after) World War II. He was married in September 1945 to Dorothy Margaret Doyle, a nurse from Queensland. From 1946 to 1951, his work regularly illustrated stories in The Australian Women's Mirror.

For several years following the war (1946 to at least 1948), Swan contributed one-page humorous features for KG Murray comics, including The Adventures of Billy Binghi, Splinter, Herb's Helicopter, Michael and his Midget Racer and Atomical Tom the Boy Inventor.

Swan had several children (William Doyle Swan +) and died in Queensland in 1969.

John Ryan's 1964 review of Australian Comics ('With the Comics--Down Under', in Comics in Australia and New Zealand) described Swan as a 'schoolboy artist', probably due to his contributions to The Sun newspaper. His year of birth is estimated from (inconsistent) ages listed in those 'Sunbeams' newspaper supplements, but is often reported as 1918. Some early Sunbeams contributions appear to be signed "Jack Swan". The name Borella, a district of Colombo in the commercial capital of Sri Lanka, suggests that this is part of the Swan family from former Ceylon. The family home is named after Yalaing, a region of neighbouring Myanmar (Burma).