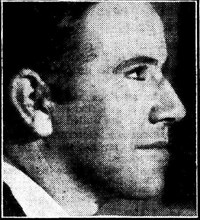 In the late 1930s, he worked as a commercial artist in Randwick, experimenting with caricatures in unusual materials. His small clay heads of Neville Chamberlain and Adolf Hitler featured in The World's News (18 November 1939—with the attribution corrected in December). He is reported to have been a magazine illustrator.

In 1944, Bradford co-founded B.B.F. Art Advertising & Publishing Company. The company's name is based on the founders' initials—Royce Bradford, Dudley Bray and Eric Francis. Bradford authored and/or illustrated a number of books before resigning in July 1945.

Bradford also did oil paintings, some of which have sold at auction since his death.

Little is known about Royce Bradford and some of this biography relies on comic artist 'Brad' being the same Royston William Bradford born in Randwick in 1916. That still needs confirmation.

There is a suggestion that Bradford was born in New Zealand (see http://pikitiapress.blogspot.com.au). However, it seems likely that he is Royston W. Bradford born in Randwick NSW on 7 September 1916. Royston William Bradford was enlisted during the second world war (Service Number NX102250) and married Doris Williams in Ryde in 1942. Royce and Doris had a daughter, Nola June, born at War Memorial Hospital Waverley on 2 June 1946 (Sydney Morning Herald, 8 June 1946).