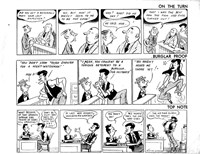 This strips were done somewhere between 1942 (the introduction of clothes rationing in Australia) and 1945 (the death of Prime Minister John Curtin). The tone of the cartoons suggest the middle of the war, rather than toward the end.

The style is similar to Mercier's French-language Labronchyte & Boulenboi, printed in Le Courrier Australien in the first half of the 1940s.