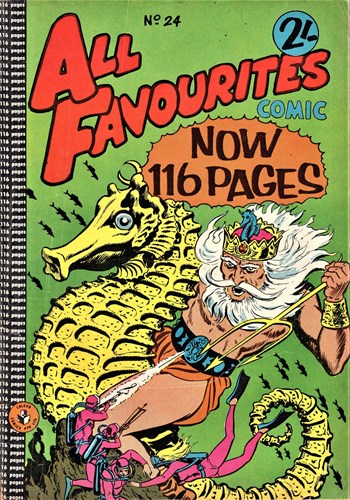 The original cover by Russ Heath is a wash drawing that may not have reproduced with the Australian reprints' cruder printing processes. 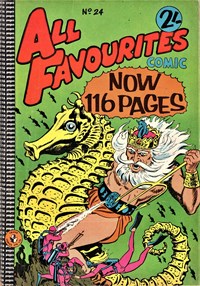 As the radio reports a UFO sighting, the Sea Devils, out in the boat Sea Witch, meet a giant "King Neptune" spearing boats from a giant sea horse. The sunken UFO's recorded message warns that Horro was a dictator on Venus banished to space. The Sea Devils dodge the mad giant until they can steer a dud torpedo into him. Whroom! But the Sea Witch was sunk, their transportation gone!

2 The Secret of the Screaming Eagle (Foley of the Fighting 5th) Comic story, 6 pages

Walt Franklin finds himself alone on the Earth with all other Earthlings replaced by robots and the Vronn attacking.

"This is your first trip in an underground cave, isn't it Homer?"

Story is followed by an internal full page advert (for Seven Seas Stamps).

Jerry finds a magic lamp in a swap shap, but the only thing the genie knows how to do is make jewels.

Story is followed by an internal full page advert (for The Mystery Book Guild). Part 1

8 I Made a Deal with Doom Comic story, 8 pages

Explorer Wally Peters is given two pills that give him amazing powers that he can use to find a hidden cave and some ancient scrolls, but the pills have a potentially deadly side effect.

Story is followed by an internal full page advert (for the Adventurers Club).

10 The Genie Who Feared June (Challengers of the Unknown) Comic story, 12 pages

While shopping with Ace in town, June drools over opals. Next door, a giant genie bursts out of the bank. Oddly, he only stole sacks of pennies. Summoning the team, the Challengers track red clay to pits outside town. Malvolio, 'the magician turned to crime', stirs a cauldron. Adding copper, Malvolio blows a ram's horn. The genie, Ahmed, appears and blows the Challengers away with a gale. But when June raises a hand and utters 'magic words', the genie recoils and flees with Malvolio. The crooks need brass and iron to bring the genie to full power. The Challengers pursue to a brass factory. Ace tries June's trick, but the genie attacks. The heroes knock a scaffolding on him. When June arrives, the genie flees. Seeking iron ore, they scout an old iron mine. June baits Malvolio's henchmen, who get jumped by brawling Challengers. Ace advances with raised hand and a magic incantation, and this time forces the genie back. Grabbing and smashing the ram's horn, Ace ends the menace. The trick? June was wearing a ring of opal, once used to combat black magic. Now Ace wears one too!

12 The Attack of the Oil Demons Comic story, 9 pages