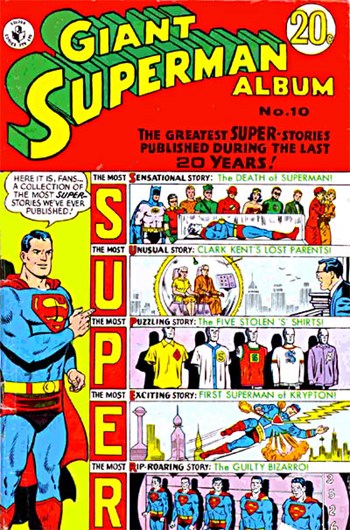 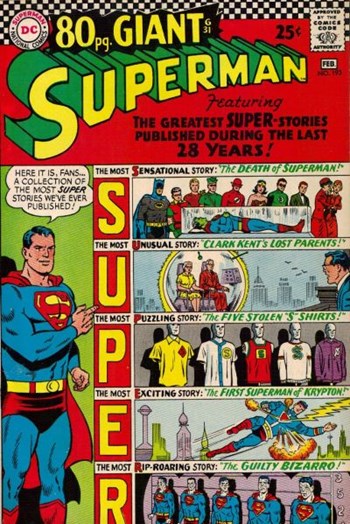 ""Here it is fans… a collection of the most super-stories we've ever published!" The most Sensational story: The Death of Superman! The most Unusual story: Clark Kent's Lost Parents! The Most Puzzling story: The Five Stolen 'S' Shirts! The most Exciting story: First Superman of Krypton! The most Rip-roaring story: The Guilty Bizarro!" 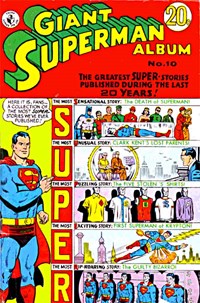 "It's a beautiful day to be out cutting the grass!"

Begins: "It's a beautiful day to be out cutting the grass!"

"Things will change for you next month. A tall, dark, handsome man will meet you. Next, please!"

Begins: "Things will change fo your next month. A tall, dark, handsome man will meet you. Next, please!" Cartoon at the bottom of page 19. The title appears to have been removed from the original to fit the space.

"Start digging homer. We should find some ancient relics here!"

Begins: "Start digging homer. We should find some ancient relics here!" Cartoon at the bottom of page 27.

"Some assistant I took along on my expedition. He's wearing a parachute!"

Begins: "Some assistant I took along on my expedition. He's wearing a parachute!" Cartoon is at the bottom of page 40.

9 The Guilty Bizarro or It's Nice To Be Wanted (Tales of the Bizarro World) Comic story, 12 pages

One page removed from the original Adventure Comics story.

Lois befriends the intelligent chimp Toto just before he is sent into orbit inside a satellite. While in orbit, the satellite passes by a collision of a uranium metorite with a kryptonite one, which causes the chimp to grow to enormous size and shoot kryptonite beams from his eyes. Because of this change, Lois re-names him Titano. Though not meaning any harm, Titano poses a threat to humanity and Superman, so the army traps the giant chimp, planning to execute him. But Lois devises a way to block Titano's kryptonite vision so Superman can send him into the past where he cannot harm anyone.