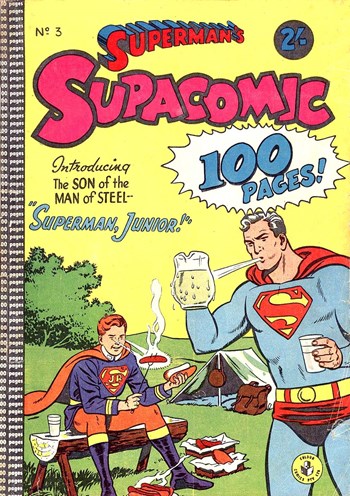 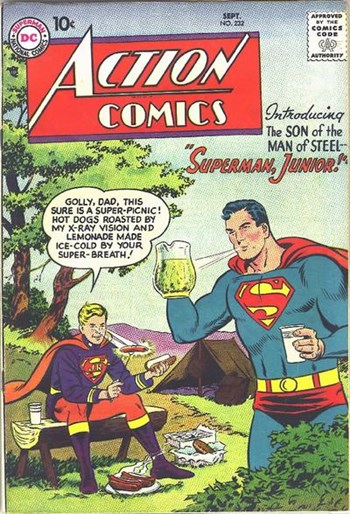 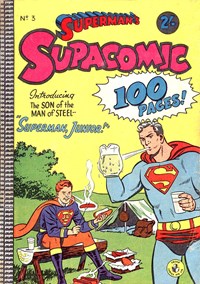 Johnny Kirk's father blasts him into space because he thinks Earth is soon to be destroyed by a meteor. After Superboy deflects the meteor, he asks him to find his son. But Superboy is all grown up as Superman before Johnny Kirk returns to Earth, now with super powers. But Superman's own powers are disappearing due to contact with a space poison that was on Johnny's space ship.

Professor Colby's ray turns Lois fat and she tries to keep Superman from seeing her.

"It was sweet of you to take you mother out for dinner!"

4 The Battle of Fort Smallville (Superboy, the Adventures of Superman when he was a Boy) Comic story, 8 pages

Feature
Superboy, the Adventures of Superman when he was a Boy
Genre
Superhero

Superboy reconstructs Fort Smallville, an old Fort that the town was built over. But a gang leader decides it would make a great place to hold off the law.

Lois meets heiress Dolores Drake who seems to be an exact double of her. Superman mistakes Dolores for Lois, and as Lois watches, he seems to prefer Dolores over the real Lois.

Originally a Superman's Girlfriend Lois Lane feature - the logo has been changed to Superman.

Lois takes a bribe and is forced into crime by Baldy Pate.

"There are so real giants!"

Superman makes himself look old in order to teach Lois a lesson, but then someone with super-powers shows up and claims to be his son.

Originally a Superman's Girlfriend Lois Lane feature—the logo for this reprint has been changed to Superman.

This feature has been slightly reduced in height from the original.

Without meaning to, Jimmy agrees to be a test subject for a week for a race of people from the planet Jupiter. As part of the experiment, he gains the ability to read people's minds, but he is also turned into a green, scaly Jovian. He uses his new abilities to compete for the Newsman of the Year award, though he wraps himself in bandages to cover his appearance. Between tracking down scoops, Jimmy casually reads Clark Kent's mind and "hears" Clark think that he is Superman. When his rival Vince Regan sees Jimmy without his bandages, he plans to expose him at the award ceremony. But luckily for Jimmy a Jovian week is equivalent to 5 Earth days, and when his bandages are removed at the ceremony Jimmy has reverted to his old self. The Jovians declare the experiment a success and help Superman preserve his secret identity.

Prominent men with names like "Car King" and "Knight Hunter" are kidnapped, and thugs finally pinch Oliver "Queen". A chess genius uses them for a human chess game - as crooks hold guns. Speedy breaks in, he and Oliver fake a fight. Oliver shoots a fountain-pen arrow to black out cameras. They reveal the "chess genius" is an impostor who held is brother hostage to steal his fortune. The faker didn't twirl his mustache while contemplating a chess move!

"This Flying carpet is all right…"