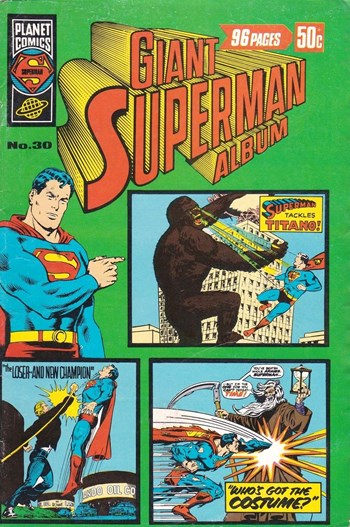 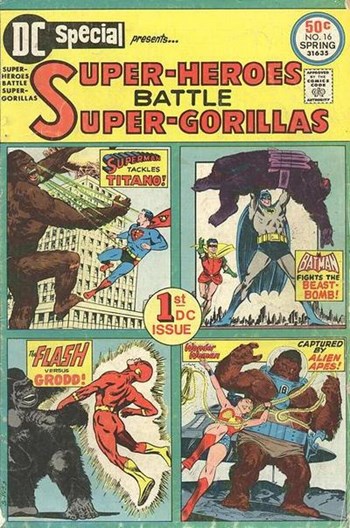 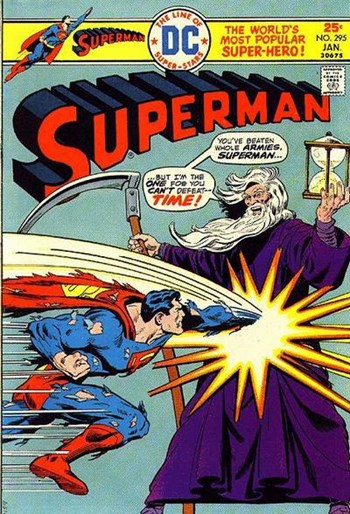 The first image from DC Special #16 substantially reprints the cover of Superman #138. 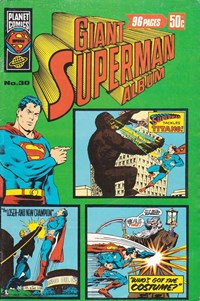 Father Time steals Superman’s costume and Superman follows it to 2975, a future unlike the future he knows, an “Earth after disaster.” There, Superman meets Jaxon, who wears his costume and the two battle until they end up back in 1975. Father Time arrives and reveals that he is a Green Lantern from the 30th century. He explains that the Time Trapper eliminated all the other possible timelines, leaving only the one in which civilization is destroyed by a Great Disaster, so he pitted Superman against Jaxon so that the energy their fight generated could restore all of the possible futures.

The Green Lanterns’ battle with the Time Trapper must have been earlier than contemporaneous Legion stories, as Duo Damsel (retired) and Invisible Kid (deceased) are shown as active members. This story was part of a larger attempt by DC to explain their two primary timelines. See The Amazing World of DC Comics (DC, 1974 series) #12.

While testing an alien artifact, Superman accidentally transports Titano from the prehistoric past to the current day. Titano goes on a rampage across Metropolis until Superman can stop him.

Vandal Savage arranges an elaborate escape plan for prisoners at Gartmoor Prison, so that he can form a prisoner army while keeping the prison warden under wraps. Hawkman sees one of the flyers dropped over the prison by Savage and briefly confronts him. Hawkman talks with the warden and alerts the Federal authorities to place the nation under martial law, but the local authorities think Hawk is crazy and try to arrest him. While Johnny and Wonder Woman monitor the struggle at JSA HQ, Savage succeeds in capturing Hawkman with a Metal Projector, an invention of the Brain Wave.

In Plateau City, the Police nab a shabby dressed man trying to shoot the Governor...only to discover that this man is a dead ringer for the Governor...and claims to be the real Governor! Then the Thinker shows up while Flash battles his men and slows him down with a strange machine, allowing his escape. Recovering, the Flash speeds over the Governor's mansion, only to overhear the Governor ordering all forces for law and order to surrender. Flash discovers the Governor to be a automation, which flees through an open door. The Thinker shows up and snares him with invisible wires.

Green Lantern arrives in Uthorium Town just as the armed forces are closing in on the Brain Wave's men looting the uthorium from a lab. Suddenly, the town disappears in a flash of light. The Brain Wave appears on the scene, opening a canister of uthorium, blinding G.L., who forms an energy bubble for protection. Recovering, GL discovers a radioactive trail and follows it, and saves Army tanks and men, then follows the trail to discover Brain Wave inside a weird glass box. Firing his power ring at it, the ray bounces back, knocking the Emerald Crusader off a cliff, apparently to his death!

On the eastern seaboard, the Atom arrives at the HQ of General "Stubby" Klemper, notifying him that Wonder Woman has informed him that lifelike automatons are being used by the Injustice Society to impersonate important government officials. Then he discovers the "General" to be one and disables it, and disguises himself like the General. Using the automaton's control box, he follows the signal to the HQ of the Injustice Society, frees the General and attacks the villains, but is captured.

Joining the armed forces of Capitol City, Dr. Mid-Nite finds himself under attack from the air, where criminal paratroopers are dropping smoke bombs to cover their take-over of the Washington Monument. He out maneuvers their grenades, over-powers them, then races up the spiral staircase of the monument to discover Degaton aiming a weapon at him. But the Man of Night throws a smoke bomb at Degaton, blinding him. After the smoke clears, Dr. Mid-Nite discovers that Degaton has escaped via a rope leading down to the Capitol dome, and he follows, only to be overcome by Degaton.

When Dr. Mid-Nite recovers, he is chained with the other JSA members (sans GL) under a "will-paralyzer" placed there by the Injustice Society, but they find a way to escape. Then they walk right into a courtroom, where the prosecutor, the Wizard, is ready to plead his case against the JSA to Judge Thinker, who declares them innocent, and reveals himself as GL. There is a battle royale while The Wizard escapes to engage the JSA one final time with his army outside, but the JJSA shows up and helps to stop him. Then before a real judge, the JSA pronounces the villains guilty!

The post-script to this is in World's Finest Comics 263, June-July 1980 (reprinted in Super Adventure 2), the final tale of the super-sons. 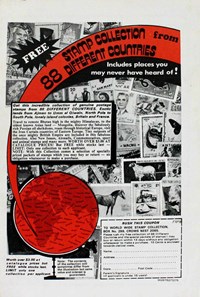