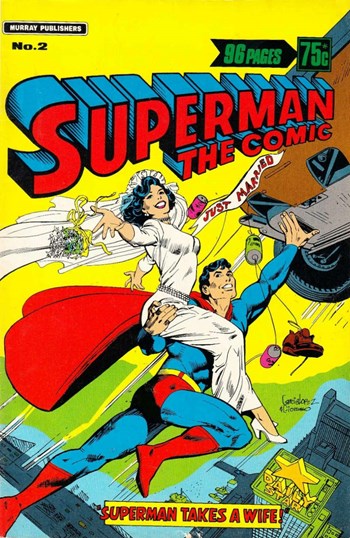 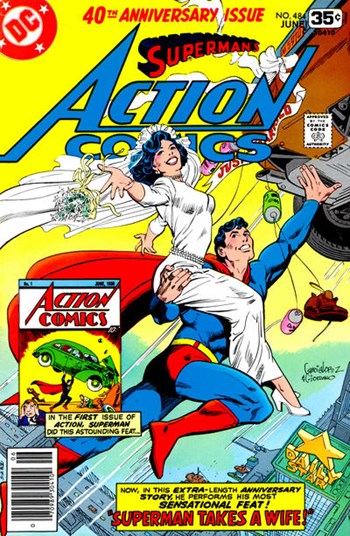 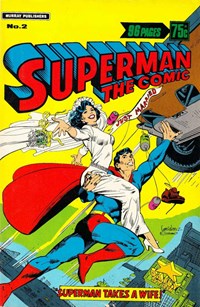 On Earth-2 in the 1950's, Colonel Future teams with The Wizard to make Superman cease to exist. Clark Kent, with no memory of his career as Superman, continues the fight against crime as a crusading reporter. His new boldness attracts the attention of Lois, and they marry. When Clark does not realize that Captain Future’s gang has made an attempt on his life, Lois begins to suspect again that Clark is Superman. She seeks out the Wizard, who had claimed responsibility for Superman's disappearance. The Wizard restores Superman, who resumes his career, and re-affirms his marriage vows with Lois.

40th anniversary issue. Colonel Future is named after writer Edmond Hamilton and in tribute to the pulp character he wrote, Captain Future. 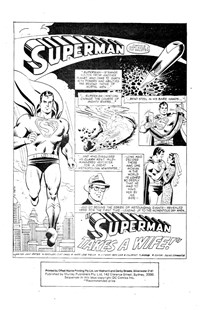 2 Superman vs. Supergirl: The Feud of the Titans (Superman (Tales of the Fortress)) Comic story, 8 pages

4 The Face on the Falling Star (The Fabulous Wold of Krypton Untild Stories of Superman's Native Planet) Comic story, 7 pages

In ancient Krypton, two siblings get lost looking for a puzzling object that fell from the sky. As they try to return home, the object helps the pair escape the hazards of the Flame Forest, but they never learn the object's otherworldly origin.

Superman travels to the future where he finds the Earth population at war with the Halflings and the Sun has turned red, robbing him of his ability to travel home. 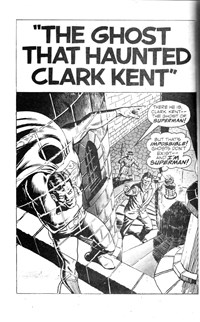 In the year 2965, Klar Ken T5477 takes over the role of Superman from his father, a role passed from father to son since the original Superman 1,000 years before. Like his ancestor, Klar works in the news business, but unlike his ancestor he is immune to the effects of kryptonite, and paralyzed by seawater, which has been irradiated by a past atomic war. Assigned to track down the story on Muto, last seen on Neptune, Klar says good-bye to his co-worker and girlfriend Lyra 3916, who likes Klar, but dislikes Superman.

Information on the size of Mecury and Australia, size of Earth's moon and Europe, and the size of the sun. 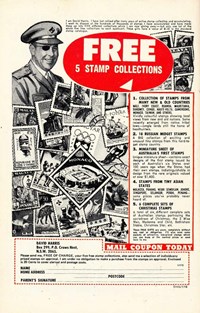