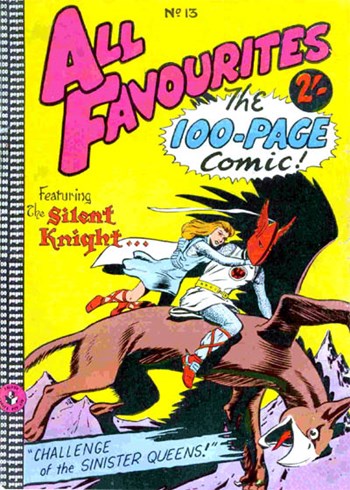 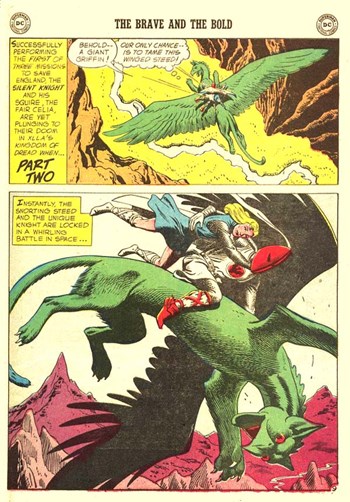 "Featuring The Silent Knight… "Challenge of the Sinister Queens!"" 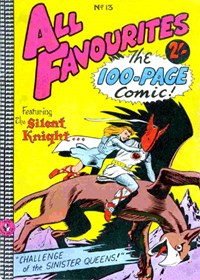 The ending of part 1 and the start of part 2 have been adjusted to give prominence ot the image used on the cover. 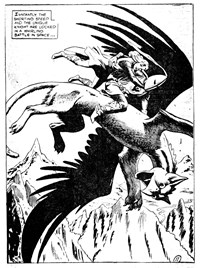 5 The Secret of the Masked Witness (The Nighthawk) Comic story, 6 pages

6 Captives of the Space Circus (Challengers of the Unknown) Comic story, 15 pages

The Challengers answer a shipwreck distress call, but find it's a mirage and a trap. They're pulled through space on a light beam and made captives of a rocket ship space circus. The heroes are prodded through cages and catapulted into a tank to fight Quadro, the Four-Finned Demons. Other alien performers are also captives. Ace coordinates an attack. Round cannonball-men fired from catapults pelt the guards while flying-men swoop on them. The Challengers battle and some captives escape. The heroes gain the cockpit and pilot the rocket to an asteroid made of glittering diamonds. As the Challengers prepare for a last stand, Prof learns the atmosphere gives them super-strength. They bombard the circus guards with boulders and disable the ships. The alien audience is surprised to learn the circus owners are criminals, and promise to send all the captives home. Ace says, "That's one flight it'll be a pleasure to make!"

"I see you came well prepared, Dr Rocket, in case the inhabitants here are not friendly!"

"You three prisoners volunteered for a medical research experiment that may be dangerous!"

12 The Creature in the Camera Comic story, 8 pages

"All set for the golf game?"