The Savage Sword of Conan #3 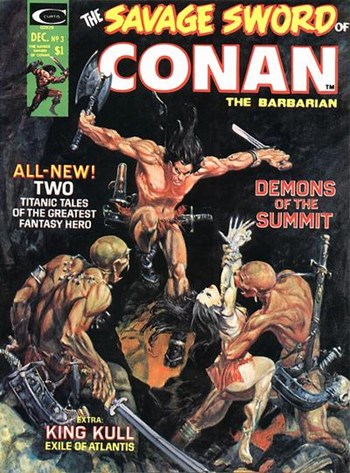 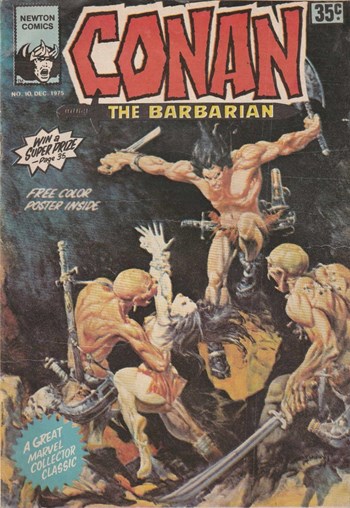 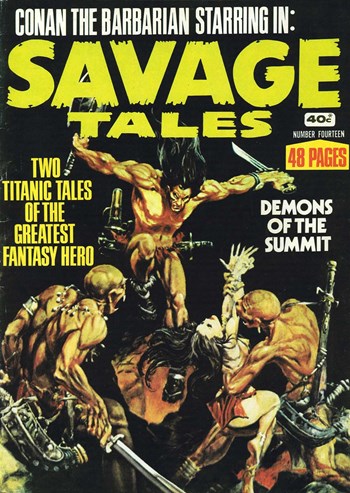 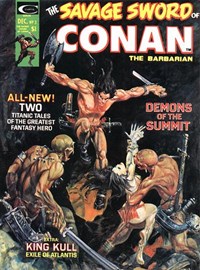 3 At the Mountain of the Moon-God (Conan) Comic story, 16 pages

Conan goes to rescue King Khossus who has been captured by Ophir.

While rescuing King Khossus, Conan must battle a pterosaur.

Feature
Chronicles of the Sword

Part II of Lin Carter's 'Chronicles of the Sword' feature examines Robert E. Howard's creation of the sword-and-sorcery genre in the pages of "Weird Tales" pulp magazine in the 1920's and 30's, starting with the Atlantean outcast who became King Kull. Article is accompanied by two Kull illustrations by Severin.

Blackmark spurns Lyllith's attentions and is slated for death in the arena facing the Flame Lizard. He is taken to a holding cell where Balzamo recognizes a mark Blackmark shared with his mother, indicating he has the power of Amarix. Balzamo and Blackmark are taken to the arena to face the Flame Lizard, but Blackmark kills the beast.

Sareeta, an Atlantean who married a Lemurian pirate, has been captured after being washed ashore when the pirate ship was broken. As Kull arrives, she is about to be burned for bringing shame to Atlantis. With her nodded assent, Kull hurls his dagger just under her heart, killing her instantly to spare her an agonizing death. Kull's tribesmen chase him with the intent of slaying him for violating their code of morals, but are unable to catch him.

This is not a complete story. According to the splash page notes, Barry Smith and Roy Thomas were planning a paperback comic book dealing with the early days of Kull of Atlantis. The paperback never happened, but Smith did a number of finished drawings in preparation for the book. Some of those drawings are presented here with quotations from the story "Exile Of Atlantis" by Robert E. Howard.

A king's emissary fails to heed Conan's warnings about Khozgari treachery, and only Conan and Jamal escape with their lives. During their escape, they encounter Shanya, the daughter of a Khozgari chief, and take her hostage. When they take a shortcut through the Misty Mountains, they are attacked by the Demons of the Summit. Jamal is killed and Shanya is taken to Shangara, leader of the summit people. He wants to use Shanya as a mate for himself and his son until Conan rescues her.

Adaptation of the short story, "People of the Summit" by Björn Nyberg and L. Sprague de Camp.

9 No title recorded (Conan) Promo (ad from the publisher), 1 page

This issue is squarebound, not saddle-stitched.