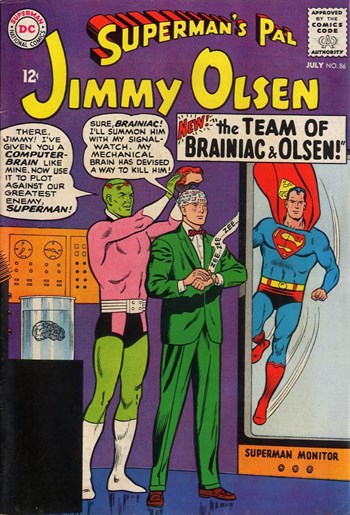 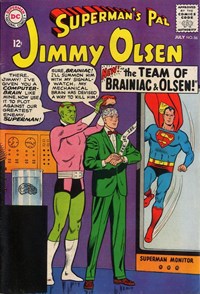 Binky suggests Allergy make friends with a new kid, Bob, but Pete does instead and then gets Allergy and the rest of the gang interested.

"Are Cheerios your favorite cereal, Bullwinkle?"

Bullwinkle crashes into a whale.

Ad, in comic story form, for Cheerios cereal from General Mills, between pages 4 and 5 of second story.

9 How to Beat Your Dad at Racing! (AMT Models) Advertisement, 0.5 pages

Ad, in comic-story form, for AMT slot cars. Appears between pages 7 and 8 of second story.

On the page between page 7 and page 8 of the previous story sequence.

When Jimmy Olsen's brain is injured in an foiled robbery, Brainiac offers to help. However, he installs a computer brain in Jimmy that makes Jimmy his servant.

first part of a 2-part story continued next issue