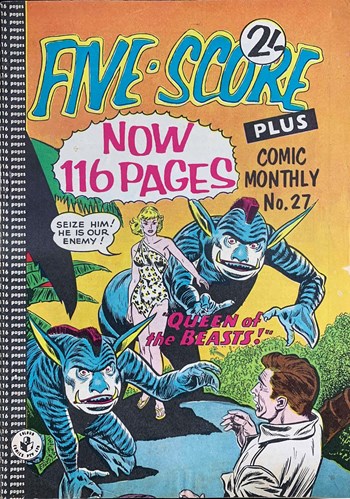 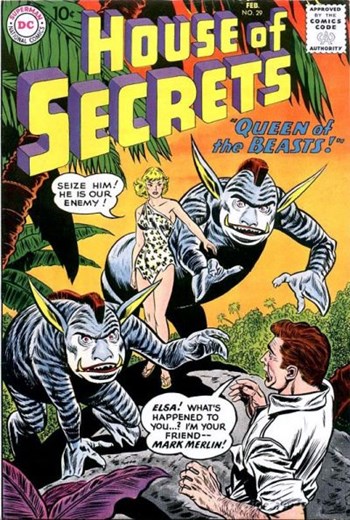 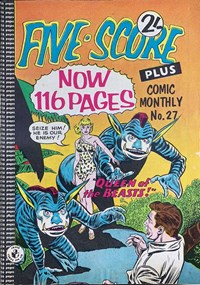 1 The Queen of the Beasts (A Mark Merlin Mystery) Comic story, 9 pages

While investigating reports of strange creatures, Mark and Elsa discover a crack in a mountainside that leads to a hidden valley. In the valley they find creatures that appear to have come from underground. Elsa overpowered by fumes from the plant life, finds she can communicate with the creatures, and determines that together they can take over the earth. 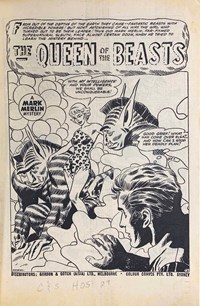 Since the Mohr-Ban offensives against Earth have been ineffectual, they eventually decide that Earth must be acting with inside information. Connecting Earth attacks on three of their planets with the visits of an entertainment troupe, agents of the Mohr-Ban know where to start looking. Teo Walker, an earthman, has disguised himself as "Ditmos," an entertainer who can make plants "dance" by playing a small flute. When the Mohr-Ban show up at his next performance, he knows the jig is up. With the help of his dancing plants he's able to make his getaway and get his final report to Earth.

5 The Movie That Was Held for Ransom (Mr. District Attorney) Comic story, 6 pages

An alien work crew comes to earth and starts leveling buildings, but it's all for the purpose of saving Earth. The aliens know that a white dwarf star is on a collision course with Earth so they want to mount a cannon to deflect the star from its path. But they miss. Earth's last chance is Rick Jordan, who's invented the Graviton, a device that can create a temporary zero gravity field and allow Rick to plant explosives on the dwarf star.

9 The Creatures on the Cliff Comic story, 8 pages

Two mountain climbers encounter aliens at the top of Mount Majorca and assume they are planning an invasion.

10 My Brother Was a Robot Comic story, 9 pages

12 The Mystery of the Alien Impostors Comic story, 8 pages

"The Rocket is ready for Launching!"

Ted Larkin had three goals growing up: he wanted to be first to land on Mars, the first to fly through the sun, and the first to circumnavigate the universe. But hard work only let him watch Edwin Blake, Stanley Adams, and Frederick Tomkins attain his goals. Disillusioned, Ted is mulling his future when he finds a piece of metal with time travel properties and decides to go back in time and beat the other three men to their goals. His better nature prevails, however, and on his time travel jaunts he instead helps the three other men accomplish their feats. 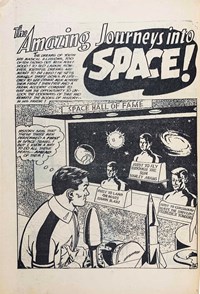