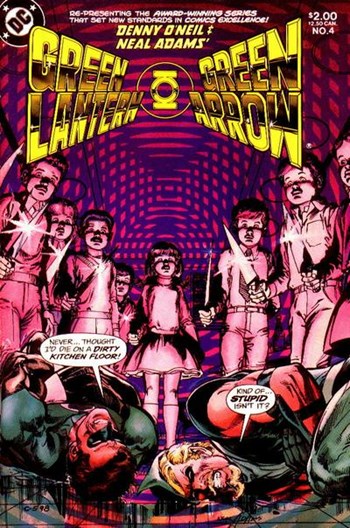 Cover is based on the bottom half of page 17 of the second story in this issue. 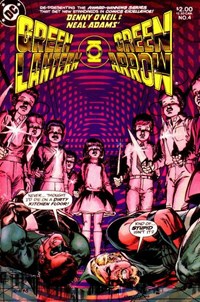 On inside front cover.

When Green Arrow and Black Canary are confronted by harpies, GA calls Green Lantern for help. GL follows the harpies into a trap laid by The Witch Queen on behalf of her brother Sinestro. Following a lead, GA and BC meet a group of Amazons, who, impressed by Black Canary's fighting skills, explain how in the distant past they were banished to another plane by a wizard, but have been allowed to return by The Witch Queen to make all men pay. With this information, the duo follows the trail to The Witch Queen and rescue Green Lantern from banishment and the grasp of the legendary Medusa.

Credits for script and pencils confirmed from Julius Schwartz's editorial records, provided by DC Comics. Though Wrightson is credited in an editor's note on p. 13, Schwartz' records mention only Giordano as inker.

Synopses of all the non-GL/GA DC stories by O'Neil and Adams, with three cover reproductions.

Green Lantern and Green Arrow accompany Dinah as she begins a job at a private school where they are greeted by the cook Grandy, a little girl with psychic powers named Sybil, and the owner Jason Belmore. After Belmore asks the costumed heroes to leave, Dinah is confronted by Grandy, who explains that in Sybil he finally found a way to keep the children of the school in order. Green Lantern and Green Arrow return to the school in time to save Dinah, and when Grandy orders Sybil to attack GL, she refuses and brings down the roof on herself and Grandy.

On inside back cover. Reproduced in black & white.

On back cover. With original cover price removed.