The Hundred Plus Comic #56 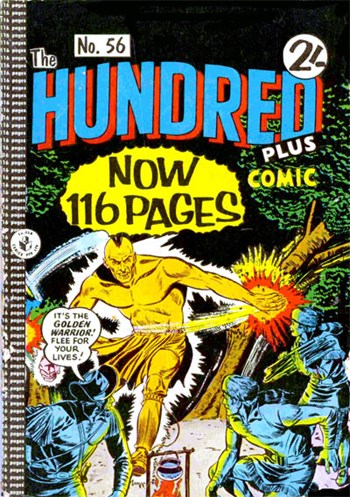 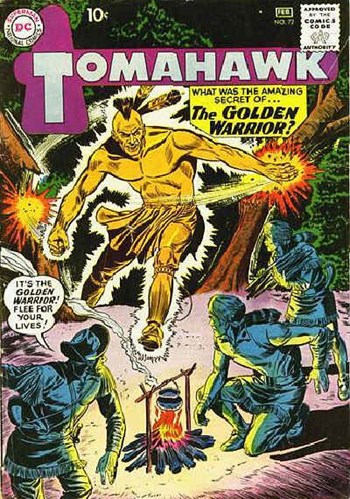 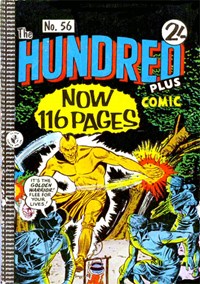 Tommy Parker finds out the story behind the single blonde hair kept in the space museum and also leans the secret of his parents marriage.

"Watch! I spray all around myself and form an invisible protective shield!"

Jones is mistaken for a missing European prince and has to help Rudolph secure his throne.

9 The Secret of the Space Capsules (Challengers of the Unknown) Comic story, 13 pages

In the North Atlantic, a Navy destroyer shells an iceberg and releases four golden capsules. One sprouts tentacles that snare the ship. Call the Challengers! Prof dives and spearguns the tentacles at the heart. They wither. But three more space capsules are missing. Tracking currents, the Challengers spot a drill-nosed monster chasing fisherman. They stop it with a wall of gasoline fire, but the monster drills out of sight. Nearby, fisherman confront two tiny gold aliens who shoot rayguns in self-defense. Ace intervenes. The aliens are growing larger and blacking out. Scientists, they came to Earth to run tests during the last Ice Age! The drill-monster was their tiny pet, Zod. Their ship was engulfed by an avalanche. They entered the space capsules and... awoke nowadays. They need “ollygen” to revive. It’s in the fourth capsule. Which is about to be sunk by a tidal wave. Red rappels down and fixes a line, almost swept under himself. The Challengers fit “ollygen” masks to the aliens, who board their spaceship and fly off! And now the drill-nose monster charges! It shears off a lighthouse which topples at our heroes - only to freeze in mid-air. Revived, the aliens ray-patch the lighthouse, retrieve their pet, and zoom away. “Farewell and thank you!”

Roy investigates Janie Vance, who thinks she has the curse of Medusa.

11 The Mystery Man of the Black Hill (The Wyoming Kid) Comic story, 8 pages

Reprints the first appearance of the Star Rovers