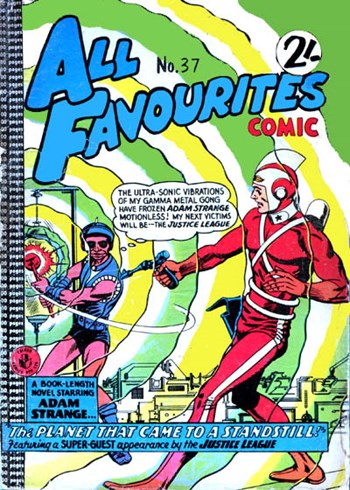 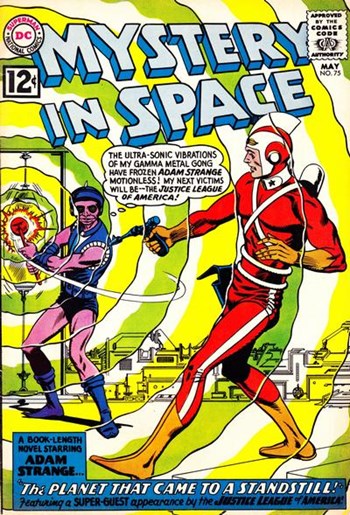 "The ultra-sonic vibrations of my gamma metal gong have frozen Adam Strange motionless! My next victims will be--the Justice League." 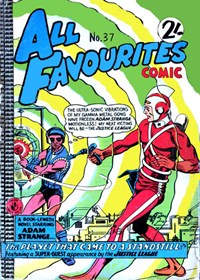 1 The Planet that Came to a Standstill! (Adam Strange) Comic story, 25 pages

Adam Strange and the Justice League team up to capture Kanjar Ro.

2 A Chief without a Tribe (Tomahawk) Comic story, 8 pages

Tomahawk meets a chief who has been exiled to a small territory that all are forbidden to enter or leave.

3 The Man Who Saved the Challenger's Lives, Chapter 1 (Challengers of the Unknown) Comic story, 7 pages

Wilfred Clayton insists he saved the Challengers' lives at their plane crash and they all owe him. Each thinks back to their lives before they became Challengers. Rocky was wrestling a brute named Barton and, despite the mob drugging his water, he won the match. Prof was a spoiled heir with a new yacht who sideswiped a work boat containing his hero, Sir Lawrence Revere, slaving to salvage a statue for local fishermen, and in helping him Prof starts to grow up.

This story is followed by a full page ad: Nestlé's new Yogi bar.

4 Chapter 2: The Secret from the Challengers' Past (Challengers of the Unknown) Comic story, 6 pages

Before they all met, Red worked on a radio tower for President Domingo in a South American country where a kid asks Red to stop the dictator's evil plans, teaching Red true heroism. Ace ran a tiny air service delivering nitro to prospectors and when a crate breaks loose he heroically delivered the cargo. Flying to their appearance on the Heroes TV show, Ace's plane crashes and they become men "living on borrowed time." Clayton claims that what they don't know is that he saved their lives after the crash. In return, he wants them to go to South America and assemble a giant statue for him.

In South America, trying to assemble the statue, Prof and Red are attacked by its flying arm and sword. They are able to reattach the arm, but realize the statue is actually a robot. Clayton binds and imprisons them along with Dr. Steuben, the robot's inventor. Meanwhile, Ace and Rocky secure the robot's other arm and are about to reattach it to the statue, when it seemingly goes crazy and batters the statue. Ace had reprogrammed the arm to destroy the robot because he realized there was one detail Clayton had gotten wrong in the Challengers' origin story.

6 We Found the Super-Tribes of Tomorrow Comic story, 9 pages

A band of explorers find two warring tribes in the South American jungle that are fighting with super-scientific weapons.

This story was originally a Jimmy Wakely feature and has been partly redrawn to turn it into a Hopalong Cassidy story.

8 The Riddle of the Two-Faced Astronaut (The Atom) Comic story, 13 pages

Ray Palmer's old friend Wizardo uses an assistant dressed as an astronaut in his magic act, but when it appears that the astronaut is using the magic act as a cover for burglary the Atom must figure out the truth.

Hank and Peter discover the Temple of Zeus and the golden apples within and either fall unconscious or have an adventure with the Greek gods.