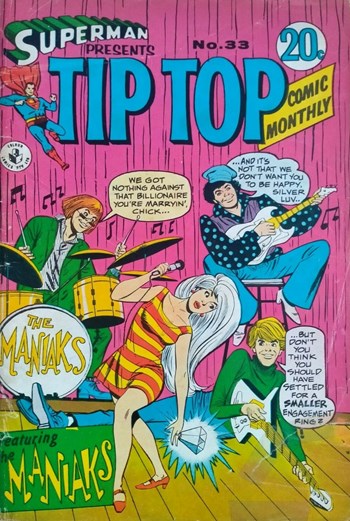 ""We got nothing against that billionaire you're marryin', chick…" "And it's not that we don't want you to be happy, Silver luv…" "But don't you think you should have settled for a smaller engagement ring?" Featuring the Maniaks" 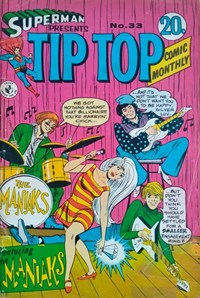 Flip, the acrobat, jumps off a building to promote their show, but the stadium only holds three guys! Richard Pipdyke XIV bought out the show. He's the son of the richest man in the world - and gold-digging Shannon is intrigued. "Tell me more!"

Richard Pipdyke takes the Maniaks to his "modest" mansion. Everything is super-expensive, from the giant cars to imported Playboy Bunnies to the cavernous wine cellar. Pack Rat shows off a goofy gadget to open a cask. And Shannon has agreed to be Richard's bride!

3 [Part III:] If You're Going to Trot Down the Bridal Path, You Need a Groom! (The Maniaks) Comic story, 5.5 pages

The guys confer. Shannon is just after Richard's gold. "It can only lead to misery." They must break up the engagement, even though "We'll still be stuck with her ourselves!" Jangle impersonates Richard, but flunks the mustache test. The guys hire an actress to claim she's Richard's wife at the wedding, but she runs off to the horse races. The wedding goes ahead, until Shannon hears "for richer or for POORER" and balks. And "That's the end of our second Showcase ish!"