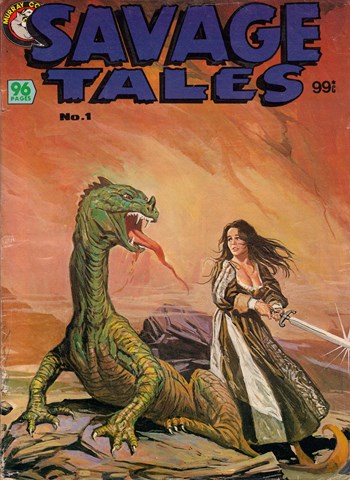 There is a small portion of a signature running vertically along the lower spine. 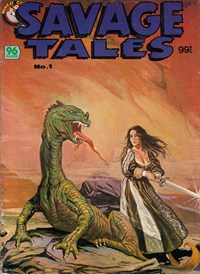 Origin of Travis Morgan as Warlord of Skartaris recapped. Re-introduction of Deimos and Tara. 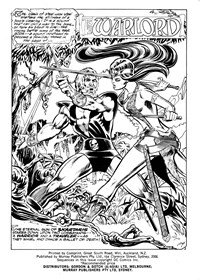 2 The Arena of Death (The Warlord) Comic story, 17 pages 3 The People of the Maelstrom (Claw the Unconquered) Comic story, 18 pages Bomba and his animal friends help to lead a trio of explorers to the Incan temple of Xamza, but Jojasta, the evil medicine man also wants to find the temple, which holds a great treasure. Bomba learns that Crane and Jojasta have been secret allies so they can keep the treasure betwen them, but Jojasta turns on Crane so he can keep it all.

Artwork on the first page of this story has been crudely extended to fill the space of the indicia in the original printing. A circle with the words "Part II" has been removed from page 12. Bomba the Jungle Boy was based on series of boy’s adventure novels beginning in 1926 by written by Roy Rokwood and published by Stratemeyer Syndicate. It became a movie series starting in 1949 by Monogram Pictures. 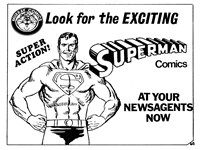 6 Find Out if You Dare [Mighty Murray Mystery Comics] Promo (ad from the publisher), 0.5 pages

"Find out if you dare what terror awaits you as you turn each heart pounding page in… Mighty Murray Mystery Comics. Available at newsagents."

The 7.5 pages of the first part are reprinted fully. To merge the stories, the bottom half of page one in the second part has been omitted, including part of a panel of art, the title and the credits. The Marcuz credit is from the second episode of the original printing in Adventure Comics #427.. Captain Fear is captured and sold into slavery.

This is the third Captain Fear story -- there wasn't an episode in Adventure Comics #428. 9 Get into Action [Murray Comics] Promo (ad from the publisher), 1 page This is a Hubba Bubba advertisement in comic format. The inside front cover of this issue is an advertisement for Oxford Stamp Co., Blaxland.

This issue was classified as unrestricted in the Government Gazette of the State of New South Wales (Sydney), Friday 3 December 1982 (#168).