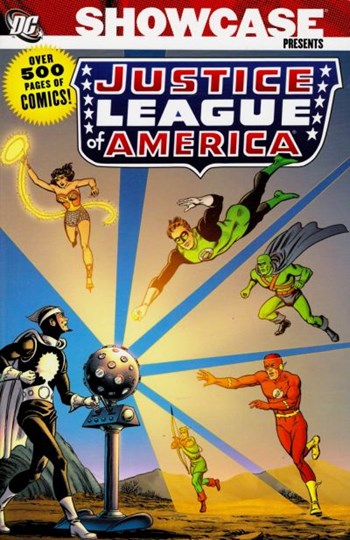 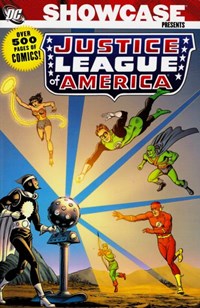 Having found an ancient book that appears to indicate that he once defeated the JLA, Xotar travels from 11,960 to the present to test four weapons against the Justice League, in order to determine which weapon will help him defeat the Intersolar Police of his own day. But the JLA counters each of Xotar's weapons and returns him to face justice in his own time.

10 The Case of the Stolen Super-Powers! (Justice League of America) Cover reprint (on interior page), 1 page

As several JLAers experience a sudden power loss, Flash finds that someone has used powers like theirs to steal a European catfish and a cicada. Snapper suggests the thefts have to do with someone researching immortality, and the JLA splits up to investigate other long-lived creatures. In every case, the JLAers come up against Amazo, who steals their powers, defeats them, and takes them to his creator's lab, where Professor Ivo is preparing an immortality serum. Green Lantern is able to use the weakness of his own ring against Amazo and Ivo, restore the JLA's powers, and defeat the villain.

13 The World of No Return! (Justice League of America) Comic story, 26 pages

The Flash must beat Despero in a strange chess-like game to save the other members of the Justice League and the people of Despero's home dimension, Kalanor.

All man-made inventions in the world stop functioning. The Justice League summons Merlin from the Magic Dimension to help find a way to restore Earth to normal.

Kanjar Ro forces the Justice League to help him defeat his enemies by freezing the people of Earth motionless. Only the combined voices of his enemies--Kromm, Hyathis, and Sayyar--saying "Kanjar Ro" can release them.From Justice League Of America (DC 1960 series) #3

Carthan, banished from his homeworld Dryanna to Earth by his ruler Xandor, attempts to contact the Justice League for help but cannot do so directly. He activates three machines of destruction that hold him to Earth and takes Green Arrow hostage, hoping that the Justice League can deactivate the machines and free him.

Adam Strange and Hawkman were also considered for League membership, but Green Arrow was ultimately selected.

Green Arrow is put on trial for helping the enemies of the Justice League escape from capture.

Professor Amos Fortune has found a way to control luck itself with his Stimoluck device, and the Justice League must find a way to overcome his unnaturally good luck while dealing with their own unnaturally bad luck.

Snapper Carr and his girl Midge must be rescued by members the Justice League after a strange trip through the new Happy Harbor fun-house. Those members, however, end up replaced by aliens from Angellax.

While Superman and Batman are away in Dimension X, small-time gangster Pete Ricketts finds a strange ray that he uses to turn the Justice League into a gang of mind-controlled criminals that he auctions off to the highest bidder.

The Justice League of America uses the occasion of its third anniversary to tell Snapper Carr about the formation of the League, involving the discovery of strange meteors that nearly doomed them forever.

Featuring the origin/first case of the JLA

Felix Faust learns that the Demons Three--Abnegezar, Rath, and Ghast--can only be freed from a spell involving the Red Jar of Calythos, the Green Bell of Uthool, and the Silver Wheel of Nyorlath, which were hidden long ago by their jailers, the Timeless Ones. Meanwhile, the Lord of Time unleashes warriors of the past and future on the present to steal for him. As the League tries to stop him, they disappear one by one and find themselves under the control of Felix Faust, who orders them to retrieve the items needed to free the Demons Three.

story continues in Justice League of America #11 (May 1962); mentions the Necronomicon and H.P. Lovecraft

The League chases the Lord of Time into the future, but when they try to return, they find themselves unable to go anywhere earlier than 2062.

35 The Planet That Came To A Standstill (Adam Strange) Comic story, 25 pages

Snapper Carr is summoned to the Justice League Sanctuary, only to find Dr. Light there. Light tells Snapper that he transported the rest of the Justice League to a surreal universe from which they can't escape. One he's finished his tale, he freezes Snapper solid.

Sforll transports the Justice League to his lair to enlist them in preventing Zed Brann from stealing the life force ("vita-matter") of our universe for his own. They must fight robot duplicates of themselves to save the universe.

41 The Menace of the 'Atom' Bomb! (Justice League of America) Comic story, 25 pages

The Justice League unanimously elects The Atom for membership, but nobody knows who he is. The Power Ring tells them about The Atom, and they go to investigate in Ivy Town. Shortly, Atom gets amnesia, the work of Mister Memory and his de-memonitor, who has captured the entire Justice League, leaving Atom the only one who can save them.

43 The Challenge of the Untouchable Aliens! (Justice League of America) Comic story, 25 pages