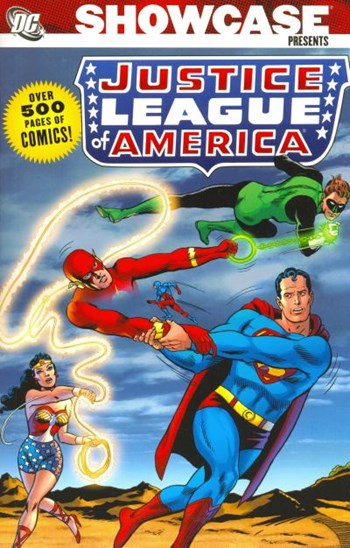 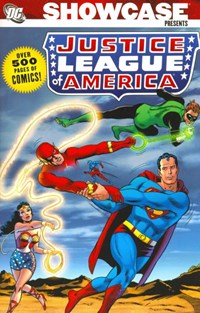 3 The Triumph of the Tornado Tyrant! (Justice League of America) Comic story, 25 pages

The Tornado Tyrant's arrogance over his first defeat of the JLA backfires on him when the JLA changes tactics.

The JLA is brought to a sub-atomic world where they need to defeat the protectors of that world in order to save its people.

The JLAers each face their evil doppelgangers and are then blamed for their lawless actions and exiled from Earth. When they return to fight their duplicates, the JLA discovers they are manifestations of their own dreams. The Atom performs microscopic brain surgery to disable them and the JLA shuts down Dr. Destiny's materiopticon to destroy the dream-beings.

An alien uses a giant spaceman to absorb disaster-energy to make himself invulnerable, but Superman separates the alien from his power source.

Three villains each from Earth-1 and Earth-2 hatch a plot to commit crimes, then hide out on the other Earth. To ensure their success, the villains of Earth-1 mystically trap the JLA in their headquarters. But the JLA summons the JSA and switches places with them.

The JLA and JSA fight their own villains on the opposite Earths until they are mystically transported to cages in space. They escape and take down the gathered villains.

The Queen Bee blackmails the JLA into securing the elements she needs for an immortality potion, but even though they fulfill their end of the bargain, they prevent her from her ultimate goal.

Kanjar Ro gains the ability to split off an aural form of himself and draw off aural forms of the JLA. He leaves his own aural form in his place in jail and uses the aural JLAers to lure their physical forms into traps. Adam Strange learns Kanjar Ro's plot and helps the JLA defeat him.

The JLA learns of the plight of three Sfarlian scientists who are transported from one world to another, and soon after they leave, the planet they left explodes. The JLAers accompany the Sfarlians and eventually arrive on the home world of the being using the energy created by the Sfarlians to power his weapons, Kraad. There, all the JLAers but the Atom are disintegrated. The Atom uses Green Lantern's ring to reintegrate the Leaguers, and though he scrambles the men's upper and lower halves, they manage to defeat Kraad.

Despero escapes his prison and ages half the JLA and dispatches the other half to alternate worlds. When Despero tries to pass himself off as an aged Superman, Wonder Woman snares him in her magic lasso and makes him return the missing members and de-age the others.

An extradimensional being prevents the JLAers from succeeding as a team when he discovers their success drains his life-force. Snapper suggests they reactivate Amazo, whose JLA-derived power overloads the being. Then the JLA must defeat Amazo and solve the crimes "I" prevented them from successfully solving before.

25 The Case of the Forbidden Super-Powers! (Justice League of America) Comic story, 25 pages

Headmaster Mind invents a device which creates natural disasters whenever the JLAers use their powers. Batman's and Green Arrow's failed efforts to stop Headmaster Mind's students Matter Master, Tattooed Man, and the Top without super-powers encourage the other JLAers to take them on without using their special abilities, while Batman and Green Arrow attack Headmaster Mind and his device.

The Crime Syndicate is so bored of life on their Earth, designated Earth-3 here, that they come to the JLA's Earth for a new challenge. Just as it looks like the JLA has the upper hand, the Crime Syndicate teleports them to Earth-3, where they have the advantage. To secure a level battlefield the Crime Syndicate plans to go to the Earth-2 and eliminate the JSA.

29 The Most Dangerous Earth of All! (Justice League of America) Comic story, 24 pages

Hawkman's first case as a member of the JLA involves low-level crook Joe Parry who has come into possession of an alien machine with which he creates three different threats against the JLA.

Brain Storm gathers the JLA as witnesses to his execution of Green Lantern for the murder of his brother.

When Earthmen from the future tap the energy of the JLAers to defeat the Alien-Ator, he becomes aware of the JLA and sets one half against the other.

Five JLAers see their own defeats in their dreams, but when the same scenarios occur to them while awake, they successfully overcome the challenges.

The Demons Three create duplicates of JLA villains in an effort to get the JLA to release them from their imprisonment.

To entertain a group of handicapped boys, 5 JLAers stages a mock battle against Batman, posing as a monster, but discover themselves handicapped. They trace their ailments to Brain Storm, who takes them under his power. The rest of the League fights the Leaguers who are under Brain Storm's power and finally Brain Storm himself.