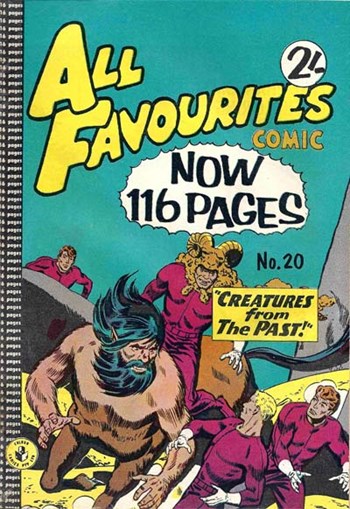 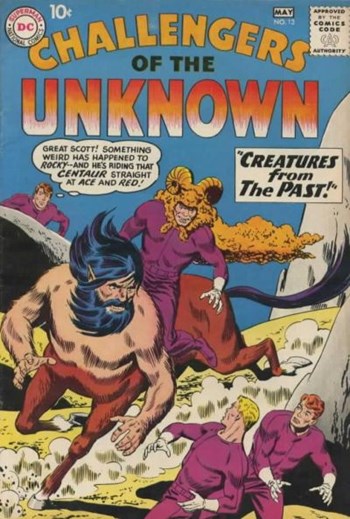 Cover Creatures from the Past (Challengers of the Unknown) Cover, 1 page 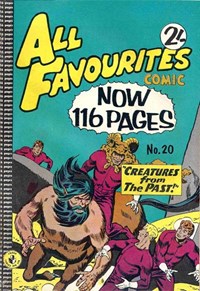 1 The Creatures from the Past (Challengers of the Unknown) Comic story, 13 pages

Off the island of Colchis near Greece, Dr. Henry has a recently-uncovered volume that claims the Golden Fleece was real. June has been helping. The party lands near ruins and splits up to search. Rocky falls into a cellar and finds the Golden Fleece! He dons it to climb out. But feels dizzy... Searching, the Challengers spot Rocky in the fleece. He runs - and a flame-breathing dragon charges, then vanishes. Dr. Henry guesses Rocky is “trapped in the fleece’s powers” and summons mythical creatures from a “never-never land.” An ancient vase of fluid might be important. Hunting Rocky, the Challengers are grabbed by a cyclops! Ace recalls its weakness is vision. He grabs a beehive and pitches it. Assailed by bees, the cyclops hides in a grotto. Dr. Henry and June have deciphered that the fluid changes gold to base metals - it can destroy the fleece’s power. While Rocky charges Ace and Red on a centaur! Prof snags a hoof with a vine, cowboy-style. Rocky hears a strange siren song and wanders to the beach. A mermaid sings - then flings fluid in Rocky’s face. It’s June in disguise! The golden fleece fades to normal. With the magic gone, Rocky’s head clears. The mythical creatures fade away to the land of legends.

A blob is turned into a giant monster when exposed to cosmic rays. It is up to Green Lantern to stop the destruction.

4 The Man Who Posed as Tomahawk (Tomahawk) Comic story, 8 pages

This is not the story of the same name from Tomahawk 63, July-August 1959.

Feature
The Fox and the Crow
Genre
Anthropomorphic-Funny Animals

Fatsy notices that Minus has an unmarked space under demerits, so tells Minus to fill it in. Minus decides that since he didn't do anything wrong, he now has a "free one" coming.

Young Princess Diana is lonely, with no one her age on Paradise Island. The scientists there make her a robot playmate, but things don't quite go as planned.

13 I Was Tried by a Robot Court Comic story, 9 pages

In the middle of the jungle, Professor Grimm has constructed an "experiment": an entire town populated by robots (and a few captive humans). Bart Howland and Dave have chanced upon the town, and are not allowed to leave. When Dave runs over a robot with his jeep, he's charged with murder and taken to court.