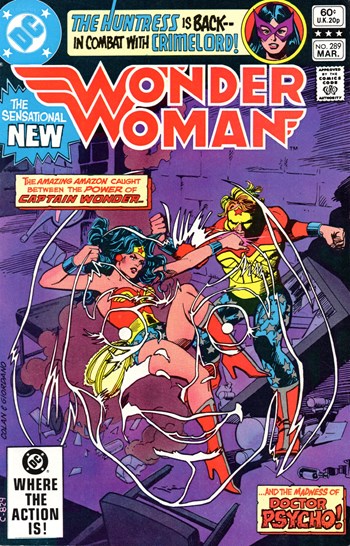 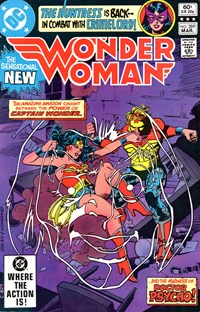 Wonder Woman trails Dr. Psycho to his Virginia estate, where Pyscho has drawn ectoplasm from Steve Trevor's mind to become Captain Wonder, an idealized amalgam of Steve and Wonder Woman.

Origin of Dr. Psycho, closely mirroring his Golden Age (Earth-2) origin in Wonder Woman (DC, 1942 series) #5. "Psycho" is a shortened form of the Dr.'s Greek surname, not revealed here. Wonder Woman notes she has never heard of Dr. Psycho before, suggesting this is Dr. Psycho's first Earth-1 appearance. Steve Trevor's other-dimensional origin allows Dr. Psycho to use him as a source for ectoplasm. Jumpa, Princess Diana's kanga from the Golden Age, makes an appearance.

Crimelord abducts Helena Wayne and hunts her down in his immense manor.