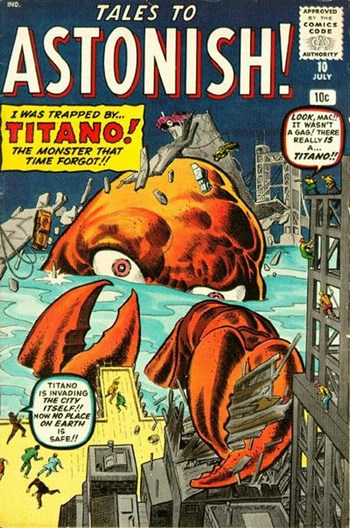 Cover I Was Trapped by...Titano! The Monster That Time Forgot! Cover, 1 page

Cover inks credit from Nick Caputo via the GCD Errors list, February 2009. Original indexer had not credited an inker. 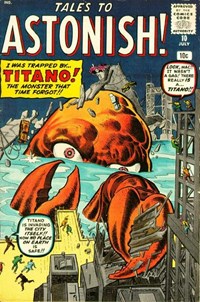 1 I Was Trapped By Titano the Monster That Time Forgot! Comic story, 7 pages

A gigantic, mutant crab is sighted terrorizing various islands in the South Pacific. When the American military learn of this, they assign Commander Hartnell to put a stop to the crustacean threat that has become known as Titano. Hartnell's crew has several encounters with Titano and they eventually lure him to the Arctic. Hartnell maneuvers his ship so deftly that he manages to trap Titano between two giant glaciers.

2 The Flying Saucer That Was Text story, 2 pages

A teacher frantically tries to convince people that he saw aliens, but it turns out that they are friendly and make him their ambassador.

3 Only I Know When the World Will End!!! Comic story, 6 pages

A derelict claims to be from another world and says that another planet will collide with Earth within days, but he is believed mad. He escapes and decides that he really is insane, hiding in a cave while, unknown to him, astronomers observe a nearby planetary collision and realise that he really was an alien.

4 Something Lurks Inside! Comic story, 5 pages

A space explorer cannot rid his ship of vicious alien spiders, and is forced to sacrifice himself to save Earth.

5 What Was the Strange Power of Simon Drudd!!? Comic story, 5 pages

A scientist selfishly uses a youth serum to gain an advantage over other people, but the serum ages him backwards into non-existance.