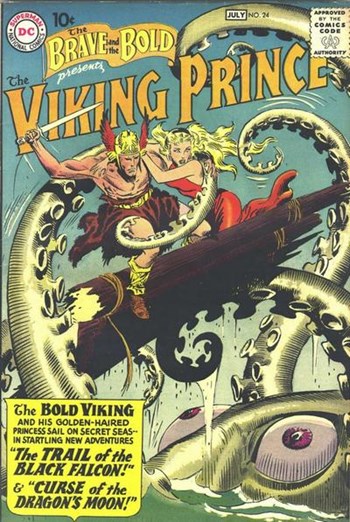 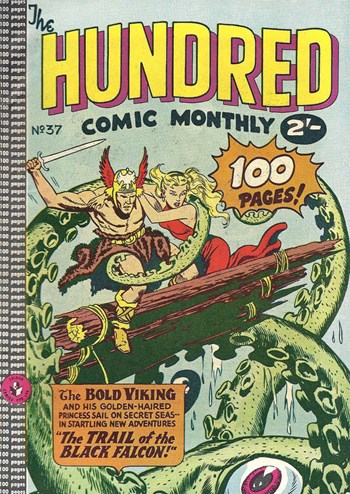 Cover The Trail of the Black Falcon! & Curse of the Dragon's Moon! (The Viking Prince) Cover, 1 page

Cover pencils and inks credits from Julius Schwartz's editorial records, provided to the GCD by DC Comics (2 February 2008). Last appearance of the Viking Prince in The Brave and the Bold and end of the historical adventures. Next issue Task Force X and The Suicide Squad begin. 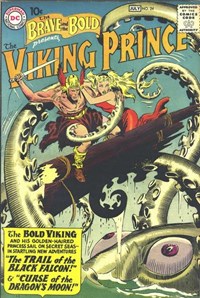 King Rikk trains son Jon to be his successor, then goes sailing. But he his crew are captured by pirates. Viking Prince sets out to rescue him, and Princess Asa sneaks aboard his tiny ship! They venture between pillar rocks and fetch on a chain - as a pirate ship attacks!

Script credits in The Brave and the Bold #117 reprint were in error. Credits were corrected with publication The Viking Prince (DC, 2010 series). Update from Gene Reed (March 18, 2011).

4 Your Passort to Strange Journeys... (DC Comics) Promo (ad from the publisher), 1 page

Fred finds that there are other ways to participate in his favorite activity of baseball, despite physical limitations or being rejected for the team.

Attacked, swept into the sea, Jon fights off a giant squid and hitches a ride on a shark with Princess Asa to enter the pirate's secret lair in a cleft. Jon beats down guards and sees his father forced to walk a gantlet. Jon rams the pirate ship ashore and battles to free his father and shipmates. They float the pirate ship and escape home, safe.

A brief recap of Viking history.

How Viking children were trained to be warriors.

Discount coupons for the circus at Palisades Amusement Park, March 27 thru May 10, 1959.

The Viking Prince and Princess Asa swim, but are attacked by a sea dragon. Jon drives it off, but acquires a dragon-scar. He's cursed to lose his strength during the three days of the Dragon Moon! Klagg the Red takes advantage and challenges him for leadership. Jon treks to drive off the curse, plunging his arm into boiling springs, icy pools, even grappling an electric eel. But the scar and curse remain. Klagg fights him and Jon is weak - until the Dragon Moon fades. He beats down Klagg, but the dragon's curse remains.

"There once was a bowler named Chris..."

Ad for a toy hand grenade.

Ad to recruit salespeople to sell plaques with religious and sentimental mottoes.

Ad for stamps from countries where pirates once raided.

Ad to recruit salespeople for Cloverine Brand Salve, a product of the Wilson Chemical Co.

Script and art credits for stories and fillers verified from copies of DC editorial records sent to Gene Reed from Nelson Bridwell in 1986.