Superman in the Fifties 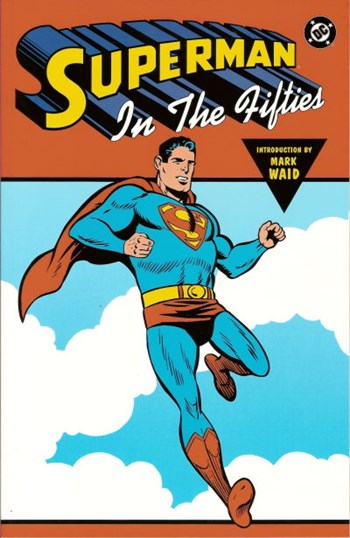 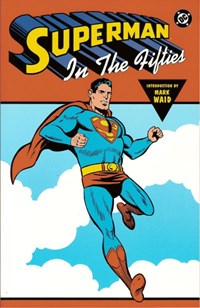 Mark Waid discusses the tight connections between the TV series The Adventures of Superman and the Superman comics of the 1950s.

Superman meets three Kryptonian brothers who were convicted and sentenced by Krypton's Ruling Council to a sentence of suspended animation adrift in space due to their efforts to overthrow the Council and rule Krypton. Now that they have crashed on Earth they plan to rule it instead. Superman tricks them into turning on each other and they knock themselves out. Superman returns them to suspended animation and releases them back into space.

The first appearance of other survivors of Krypton. In this story, the natives of Krypton are called Kryptonites. Their abilities are still natural, and not caused by the different gravities or suns of Earth and Krypton.

7 The Menace from the Stars! (Superman) Comic story, 12 pages

After attempting to destroy an asteroid with traces of Kryptonite, Superman loses his memory, and assumes he is dressed for a costume ball. He changes into the clothes in the cape pocket and heads to the Daily Planet, where he hopes he can find out his identity from a report on who wore what to the ball. Lois and Perry tell him he is Clark Kent and also that Superman has disappeared. When Clark later puts on the Superman suit to fool some bank robbers and finds that bullets bounce off him, he credits the suit for this ability. He breaks up the asteroid, he believes thanks to the Superman suit, but decides to reveal to the Daily Planet how he has been acting as Superman, but isn't the real Man of Steel. As he walks to the office in plainclothes he is hit by a truck and remembers that he really is Superman.

Superman restores the sight of a blind girl and reunites her family.

Superboy finds out that something he did on his last day in Smallville as Superboy is going to allow a criminal to make $1,000,000. Superman must think back to that day and discover what it was that he did. As he remembers his graduation and the cake that was presented to him by the town, he figures out the criminal's plan.

A wrestler billed as the Ugly Superman falls for Lois. But when he won't stop forcing his attention on Lois, Superman teaches him who the better man is.

Describes some of the features of Superman's Fortress of Solitude.

Mark Waid discusses the expansion of the Superman family in the 1950s, including Krypto, Supergirl, and Titano.

When Halk Kar crashes on Earth, the note he carries in Jor-El's handwriting makes Superman suspect that Halk Kar is his older brother. But when Halk Kar joins Superman in his pursuit of "Wrecker" Ross, Halk Kar receives an electric shock and remembers that he is actually a space traveller from Thoron who met Jor-El on Krypton just before it exploded.

A super-powerful dog arrives in Smallville in a rocket complete with written records proving that he is baby Kal-El's puppy who Jor-El used as a test animal when developing his space rockets. Though happy to be reunited with his dog, Superboy needs to make sure that Krypto does not give away his secret identity several times before Krypto leaves for a romp in space.

Lois befriends the intelligent chimp Toto just before he is sent into orbit inside a satellite. While in orbit, the satellite passes by the collision of a uranium metorite and a kryptonite meteorite, which cause the chimp to grow to enormous size and shoot kryptonite beams from his eyes. Because of his transformation, Lois re-names him Titano. Though not meaning any harm, Titano poses a threat to humanity, and Superman, Lois and the army trap the giant chimp, planning to execute him. But Lois devises a plan to block Titano's kryptonite vision so Superman can send him into the distant past where he can't harm anyone.

Describes how Clark Kent met the mermaid Lori Lemaris. Incorrectly refers to "The Girl in Superman's Past" from Showcase #9, rather than the story by the same title from Superman #129.

Superman From the Thirties to the Eighties (Crown, 1983 series) (1983) — The Supergirl from Krypton!

Superman spies a crashing rocket and discovers his cousin Supergirl. She tells him how Argo City survived the destruction of Krypton and how her father sent her to Earth when the inhabitants of Argo City were threatened by Kryptonite poisoning. Superman sets her up in Midvale Orphanage so she can adjust to life on Earth.

Describes the main villains that challenged Superman in the 1950s.

Mr. Mxyztplk teams with the Prankster and Lex Luthor to humiliate Superman by making "plastic proxies" (androids) which make it appear as if Lois has jilted Superman for Mxyztplk, make it seem that Superman has falsely accused Luthor, and makes Superman look like the victim of the pranks of the Prankster. But just as the public begins to wonder why they ever admired him, Superman turns the tables on the trio.

While Clark Kent and Lois Lane are passengers on an experimental rocket, the rocket is snagged by the alien Brainiac. Clark switches to Superman, but can't penetrate Brainiac's force shield, so he moves the rocket out of the control of Brainiac's ship. Brainiac turns to his primary goal, which is to shrink and bottle the great cities of Earth in order to restore them to normal size and repopulate his own planet, whose native people have all been wiped out by a plague. Superman returns to Metropolis, expecting Brainiac to also snatch that city, and through that gain entrance into Brainiac's ship. Once inside Brainiac's ship, Superman finds a bottle with the shrunken Kryptonian city of Kandor. He enters the bottle, but loses his powers under its artificial gravity. There he seeks the help of a scientist who helps him plan a way to restore the cities of Earth while Brainiac lies in suspended animation for the trip back to his own planet. But unfortunately there isn't enough power to restore Kandor, so Superman places it in his Fortress until he can find a way, while Brainiac's ship rockets away with Brainiac unaware that he is returning home empty-handed.

Luthor steals Professor Dalton's duplicating machine and creates an adult Bizarro to menace Superman, but this Bizarro turns on its creator, hands him over to the authorities, and attempts to help Superman. When the people he has helped react in horror to him, Bizarro gets depressed. He misinterprets Lois' sympathy to his plight for true affection and takes her to a remote island. But when she rejects him, he turns the duplicator ray on himself and creates a handsome bizarro duplicate, whom Lois mistakes for the real Superman.

Continues in the following story.

A short origin of Metallo.

Bizarro keeps the real Superman from revealing to Lois that she has been proposed to by Bizarro's duplicate, whom he calls New Bizarro, with a kryptonite meteorite, but Lois realizes New Bizarro is not the true Man of Steel. But New Bizarro doesn't give up easily, and the duplicates fight each other. Bizarro seeks out Superman's help and destroys the kryptonite, turning it into a dust cloud which destroys New Bizarro. Bizarro resumes courting Lois, until Lois creates a duplicate of herself so that Bizarro can have his own Bizarro-Lois.

A brief summary of the story in which Robin travels to the past to get Superboy's help.

When newspaper mogul John Wilton buys the Daily Planet and immediately shuts it down, the former employees start their own paper, gathering scoops in the new jobs they have taken to pay the bills. But Wilton tries to shut down this new competitor permanently.

When trailing Jimmy Olsen as he collects charitable donations around the city, "Labs" Logan figures out that Jimmy summons Superman through his wristwatch. So when Jimmy isn't looking, Labs changes the signal's frequency so that Superman won't come to Jimmy's rescue. But when Labs changes the signal back the proper frequency to lure Superman into a kryptonite trap, Jimmy uses the signal to broadcast Morse code to warn Superman, who nabs the crook long-distance and helps Jimmy deliver the charity collection.

Short biographies of the writers and artists whose work appears in this volume.