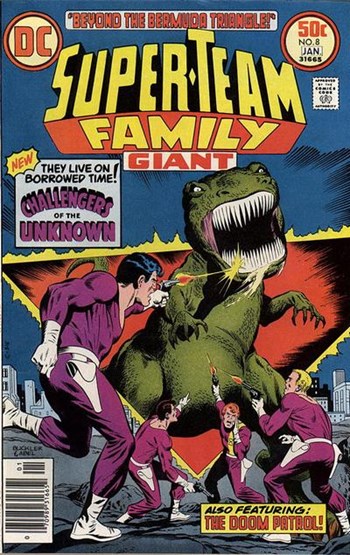 Cover Beyond the Bermuda Triangle! (Challengers of the Unknown) Cover, 1 page 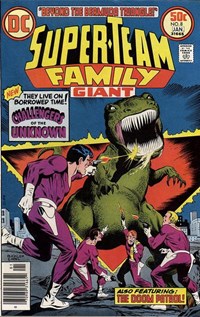 2 The Devil's Paradise (Challengers of the Unknown) Comic story, 17 pages

With world war imminent, President Ford asks June Robbins and the Challengers to find Henry Kissinger, who was lost in the Bermuda Triangle. The Challs circle and hit a "vibration field" that tosses them into another dimension, to an island peopled with time-lost warriors riding triceratops. Vibrations from the beasts' horns knock the Challs cold. (And keep the island hidden in the vibration field.) They're locked up with Kissinger and condemned by The Tribunal. Using electronic gadgets from boot heels, they shatter the cell bars and slip from the castle. Warriors attack, but Prof's gadget negates the brain-numbing horn vibrations. Challs fight, Kissinger swings his briefcase, Ace pilots the jet and scoops up Red Ryan, and whisks them through the vibration field back to Florida. Kissinger thinks the world could learn a lesson from those diverse warriors who banded together. Maybe war itself can become the enemy!

June Robbins finally gets a uniform and becomes the fifth Challenger.

Includes a recap of the origin of the Challengers.

The Brotherhood of Evil tricks Negative Man into helping them steal the secret plans for a machine that can enlarge objects to giant size.

Negative Man stops the plans of the Brotherhood of Evil by removing his bandages and revealing his radioactive powers.

Revival of the adventures of the Challengers of the Unknown.

On sale date from promotional ad in Isis #2 and from Comic Reader #135.