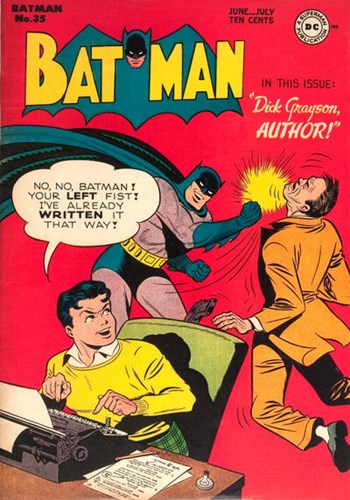 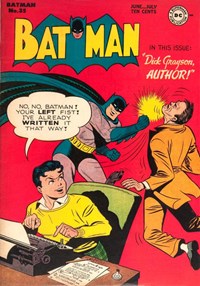 Catwoman arrives at the state women's prison and uses her catseye on her guard to make her escape. However, when shje returns to her digs and attempts to put her gang back together, most want no part of her since Batman always defeats her. So the Catwoman decides on a daring plan: to prove to her boys she has the nine lives of a cat and cannot be killed!

Catwoman adopts the classic purple and green costume with mask instead of Cat's head. Both art credits confirmed by Jack Burnley (to Craig delich) and Bob Kane (to Joe Desris).

Batman and Robin are challenged to a game of "Touch Hunt" on famed Dinosaur Island in return for a gift to charity in the amount of $5000.....if they win the game. But they soon discover that they are the prey being hunted....by a very human adversary!

This text story was NOT reprinted in the Archive edition.

Letterer credit by Craig Delich. This sequencxe is NOT reprinted in the Archive edition.

Dick, interested in comic magazines, accompanies Bruce to the offices of the editor of Crescent Comics, and is invited to write a script. However, ideas do not come easy and is superceded by a case involving ex-con Big Ed Conroy. The Dick discovers that he can use real facts for his story, which is soon published and titled "Crooks' Come-Back".

Penciler revision from Dick Sprang to Bob Kane and inker revision from Dick Sprang to Ray Burnley by Craig Delich. However, there are a few indications that display partial art by Sprang, especially panels 3 and 4 on page 12 (that is Sprang's bat on Batman's chest, not Kane's). Throughout the story, there is no cape knot at Batman's throat (such as seen in the previous two stories by Kane and Burnley). Sprang told Craig personally that the art on stories marked Kane and Burnley are not his; he never worked on them. Later, Kane told Joe Desris that these stories were his pencils with Burnley inking him. The Robin figures on the splash and first two pages appear to be Sprang's work (as is the cover), and maybe a few other random Robins. Craig Delich's guess, is that Sprang may laid out this story, Kane finished the pencils and then Burnley did the inks. Artist ID by Martin O'Hearn, formerly attributed to Bob Kane.