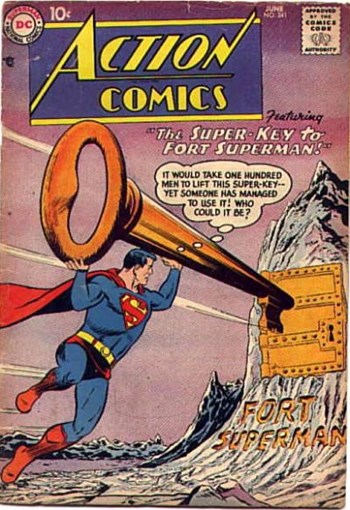 cover shows key to Fortress as a giant skeleton key. 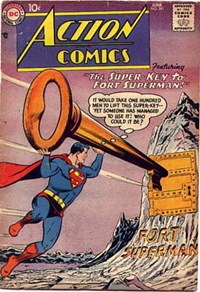 Batman has broken into Superman's Fortress of Solitude as a birthday prank, so Superman searches the place for clues.

Superman's original Fortress appeared in Superman #58 (May 1949), no resemblance to the current version. Called Fort Superman on the cover, inside it's called the Fortress of Solitude. Though the fortress key on the cover is shown as skeleton key, in this story the classic square edged version is shown.

The lower right corner of the splash page, which depicts Superman sitting in a chair and using his super-vision, is used as the illustration that appears at the top of the Metropolis Mailbag letter column in Action Comics #245-271 and Superman #124-145.

"Tricksy, I worry so about your being shot out of that cannon!"

"Mom, can I go out and watch the eclipse of the sun?"

"Jerry, would you go down to the Bijou Theatre and bring my brother home?"