The Adventures of Rex the Wonder Dog #17 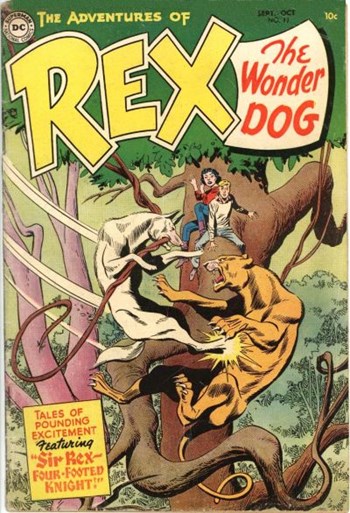 1) Colors credit from Keith Chandler via the GCD Error Tracker (http://errors.comics.org/show_bug.cgi?id=7805). 2) The vine-swinging cougar-kicking scene on the cover is not in the book, but rather in issue #20, "The Thundering Earth!" 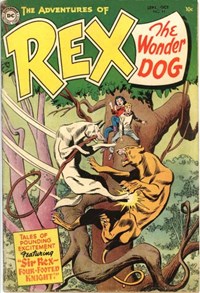 Buzzy and Susie spend their summer volunteering to help with day camp activities for children.

Major Dennis, Danny, and Rex crash their plane in remote forest marked with a huge cutout of Rex! Danny and Rex go for help. They're chased by medieval knights of evil Duke Dratho who think Rex is "Rex I" from prophecy! Thrown in the dungeon, Princess Elwyn tells the story of Rex I and the huge memorial. Rex survives an archery contest and fights a joust to defeat Duke Dratho and spark an uprising. Dubbed knights, the Dennises repair their plane and fly back to civilization.

Bobo's latest craze is collecting autographs. The Sheriff is summoned to a hotel where $50 was stolen and oddly returned. Bobo chirps about the signatures in the hotel register, then sneaks around back to rescue Wallace Brook, a famous movie actor. Bobo recognized the signature when he was forced to sign in while kidnapped! Bobo even gets a hug - and autograph - from his fiancee' starlet!

6 No title recorded (Batman) Promo (ad from the publisher), 0.33 pages

8 Editorial Advisory Board Promo (ad from the publisher), 0.5 pages

Includes a plug for polio research.

11 The Secret of the Scorching Sands! (Rex the Wonder Dog) Comic story, 8 pages

Danny arrives by train in Los Angeles where Rex will receive an award, but he's lost Rex!.. Earlier Rex went out on a platform and lurched off the train! He rescued a prospector left for dead by his thieving partner. Following his trail, Rex bowls over the villain and recovers the stolen poke. "Hitchhiking", Rex is recognized and arrives in time for his award ceremony. And an old prospector reading about it in the desert knows Rex deserves it!

14 The Insult That Turned a "Chump" Into a Champ (Charles Atlas) Advertisement, 1 page

15 How Chuck's Fineline Pen Got Him in the Movies! (Fineline) Advertisement, 1 page