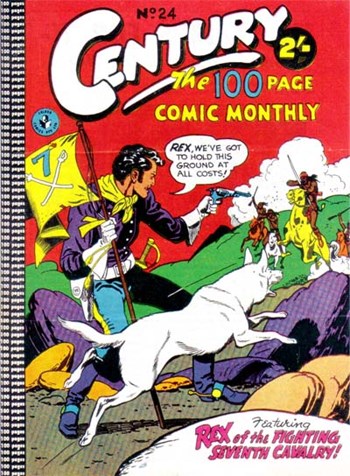 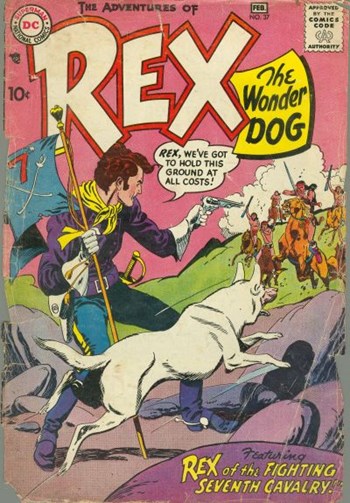 Cover Rex of the Fighting Seventh Cavalry! (The Adventures of Rex The Wonder Dog) Cover, 1 page

"Rex, we've got to hold this ground at all costs!"

Feature
The Adventures of Rex The Wonder Dog
Genre
Animal 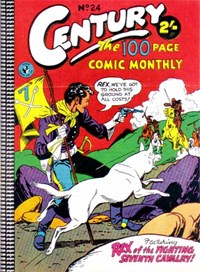 "Chief, you always walk with dog!"

3 Rex of the Fighting Seventh! Cavalry!! (The Adventures of Rex The Wonder Dog) Comic story, 10 pages

At Prairieville's Wild West Days, Major Dennis, Danny, and Rex are asked to recreate how they captured the Pecos Gang. But Colonel Blitz, an old Nazi nemesis, enlists the escaped "Pecos" to stage a robbery for revenge and a Golden Sioux statue. A double-cross helps Rex capture Pecos. Then it's off the desert in cavalry uniforms for an Indian raid, and here Col Blitz hires thugs to grab the statue. Rex's cunning, dodging, and bulldog attacks avert a massacre and save the day.

A sorcerer gives Alex Denton unlimited power as long as he never rides in a vehicle of a certain color, but the sorcerer refuses to say which color. Denton tricks the sorcerer into revealing the color, but then he is in accident that leaves him color blind and he accidentally enters a car of the forbidden shade.

Wolfie finds a unrecognizable object at the junkyard and tries to sell it to Peter as an antique Tasmanian Whatsit.

Bobo mime-requests a vacation in Thunder Bay because the Explorers' Club is hunting Spanish treasure. Bobo dons a goofy "Professor" disguise, climbs in a tree for a nap, and dislodges an old chest - full of gold coins! Crooks grab the chest, but Bobo topples a rock into their boat, sinking them. He gets a reward and paid vacation, but opts to hang around the Sheriff's office "where nothing ever happens!"

Sailors dump dangerous chemicals that can cause insanity into the sea, just as Aquaman surfaces nearby! He's jinxed as all the helpful rescues he tries flub up so he looks insane. Authorities try to trank him. It's only when he does flub up that he rescues a mini-sub, and looks smart. "I'd better just play along... and leave well enough alone!" 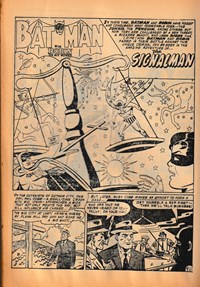 "Well, men, I want to thank you for all your help! We finally did it!"

18 Why Summer Is Hot and Winter Is Cold (Science Facts) Comic story, 1 page