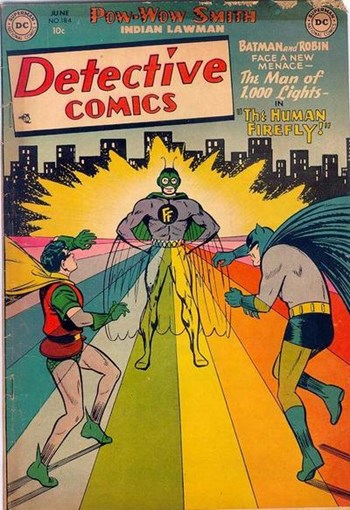 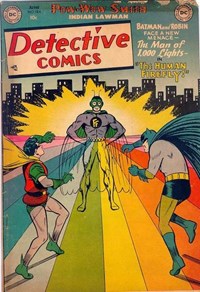 Garfield Lynns, a disgruntled special effects creator, turns to crime and tries to rob the rich of Gotham City during a gala premiere. The robbery is stopped by Batman and Robin, who pursue Lynns into the swamps, where a lowly firefly distracts the two heroes long enough for Lynns to make his escape. Lynns decides to take on the super-villain persona of Firefly and launches a series of spectacular crimes.

3 What Sparks a Champion Sparks You! (Wheaties) Advertisement, 1 page

5 The Man Who Controlled the Elements! (Impossible-- But True) Comic story, 7.67 pages

7 The Most Mysterious Book in the World Text article, 2 pages

9 No title recorded (Out of This World; Necco) Advertisement, 0.33 pages

Feature
Out of This World; Necco

12 Editorial Advisory Board Promo (ad from the publisher), 0.5 pages

Includes a plug for A Date with Judy on ABC.

"The oldest symbol in comics..."