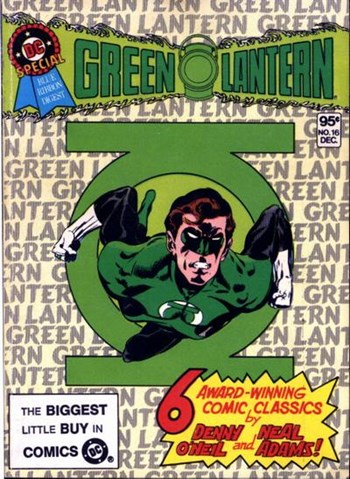 Figure taken from page 11 of "Ulysses Star Is Still Alive" in Green Lantern #79. 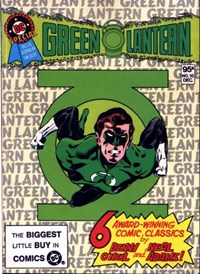 Green Lantern and Green Arrow, now joined by Black Canary, travel to Oa and find that Old-Timer has been found guilty by the Tribune. The Guardians strip him of his immortality and sentence him to live out his days on the planet Maltus. The heroes go with him into his exile and discover a planet wildly over-populated due to the efforts of Mother Juna. After they put a stop to her work, the Old-Timer vows to restore balance to Maltus.

3 How Do You Fight a Nightmare? (Green Lantern; Green Arrow) Comic story, 22 pages

When Green Arrow and Black Canary are confronted by harpies, GA calls Green Lantern for help. GL follows the harpies into a trap laid by The Witch Queen on behalf of her brother Sinestro. Following a lead, GA and BC meet a group of Amazons, who, impressed by Black Canary's fighting skills, explain how in the distant past they were banished to another plane by a wizard, but have been allowed to return by The Witch Queen to make all men pay. With this information, the duo follows the trail to The Witch Queen and rescue Green Lantern from banishment and the grasp of the legendary Medusa.

Credits for script and pencils confirmed from Julius Schwartz's editorial records, provided by DC Comics. Though Wrightson is credited in an editor's note on p. 13, Schwartz' records mention only Giordano as inker.

While Carol Ferris is in Piper's Dell, the sea wall protecting the town begins to give way, so Hal responds as Green Lantern. After saving the town, GL is given a tour of the plastic factory. Weakened by gas emitted by the plastic pins produced there, he is unable to fight back, so he sends his ring to Green Arrow. When he revives, he finds that his old enemy Black Hand uses the pins to keep the community under his control. He sends GL and Carol out into the streets to face the wrath of the townspeople, but Green Arrow arrives in time with GL’s ring, and GL traps Black Hand in his own plastic.

During an attack, Green Arrow accidentally kills one of his assailants. After he calls Dinah to say good-bye forever, Dinah summons Green Lantern, who finds the same thugs who attacked GA have now planted a bomb in his building.

Credits for script, pencils and inks confirmed from Julius Schwartz's editorial records, provided by DC Comics. Labeled "Chapter 1" on the title page, though the following installments of the series are not labeled chapters.

When Black Canary is hit by a car and desperately needs a transfusion, Green Lantern's search for Green Arrow becomes even more urgent. A report on the wreckage of the Arrow-Plane leads Green Lantern to Green Arrow, but also to a scavenger, who nearly kills Green Lantern before Green Arrow can grab his bow and remember who he really is.

Credits for script, pencils and inks confirmed from Julius Schwartz's editorial records, provided by DC Comics. Actually bannered as a "Green Lantern and Green Arrow" feature on the splash page.

Inside back cover. Promo for "new" Wonder Woman series.

Back cover. Four headshots of Green Lantern from Green Lantern #89 (top left), #83 (top right and bottom left), and #86 (bottom right), and the titles of the stories in the issue.