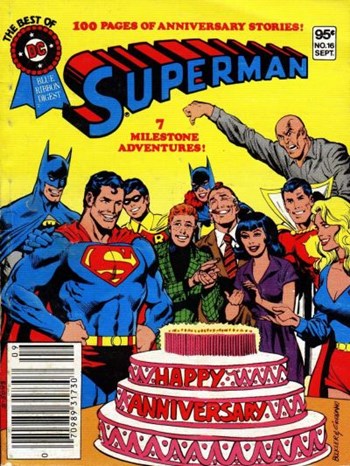 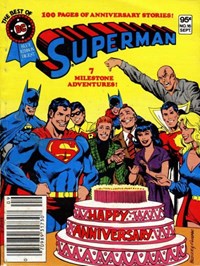 After a prologue which demonstrates Superman's amazing abilities, his origin is recounted. On the scientifically advanced planet of Krypton, Jor-El fails to convince the Council of Five that Krypton is doomed. As Krypton explodes, Jor-El and Lara send their son to Earth, where he is found and adopted by the elderly Kents. As Clark grows to maturity he manifests abilities far beyond that of mortal men. On his deathbed, his father urges Clark to become a powerful force for good as Superman.

a 10th anniversary story. Name John Kent appears on Superman's father's tombstone. This is the only time this name is used. Kryptonians are shown to have x-ray vision.

Someone has broken into Superman's Fortress of Solitude, so Superman searches the place for clues.

A criminal from Kandor switches places with Jimmy Olsen and forces Superman to reveal the location of his Fortress of Solitude, so he can destroy the bottled city. But scientists in Kandor reverse the switch just in time.

A 25th anniversary story. In this book, the art for this story is incorrectly credited to George Papp. Plastino credit confirmed by Bob Bailey and Gene Reed, March 2008.

Jason Desmond's dying performance is an attempt to fool Superman and Batman into believing he is 2 aliens, one hunting the other. But his story rings false and Superman lets Batman in on the hoax, which ends up fooling Supergirl, Batgirl, Robin, and Jimmy Olsen anyway.

8 A Tale of 3 Teams (Part II of The Superman-Batman Split) (Superman and Batman) Comic story, 9 pages

Willie Fawcett finds himself lost in Superman's universe and that whenever he changes into his super-powered alter ego of Captain Thunder he becomes evil. Superman helps him figure out the way to return to his universe and shake the evil influence of the Monster League of Evil.