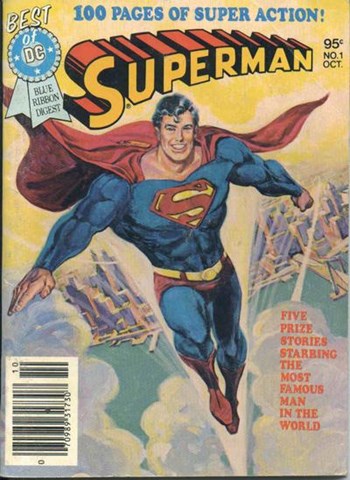 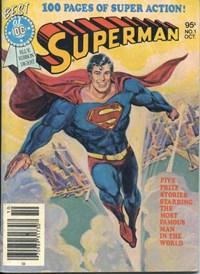 Inside front cover; black and white.

2 Attack by the Army of Tomorrow! (Superman) Comic story, 22.5 pages

The origin of Superman's costume.

Six story panels over a monochrome background of tiny laughing figures. The original also had a first page with the title shown, but this reprint is untitled since it only has the last two pages.

A short feature on Superman's enemies. Original title: "The Superman Legend: Rogues' Gallery!" The pages are in reverse order.

Artists play with changing Superman's and Clark Kent's appearance, and includes a blank rough for the reader to try it.

Original was black and white; this is colored. Some drawings are pen and ink, others are just pencils.

In this imaginary story, Lex Luthor invents a cure for cancer and, with Superman's intervention, is released from prison.

Superman becomes Luthor's bodyguard to protect him from attacks from the underworld. After Superman builds him an orbiting laboratory, Luthor betrays him by attacking him with a kryptonite ray.

After the funeral for Superman, Supergirl captures Luthor and takes him to Kandor to stand trial for killing Superman.

Back cover. Lists the main stories in this issue.