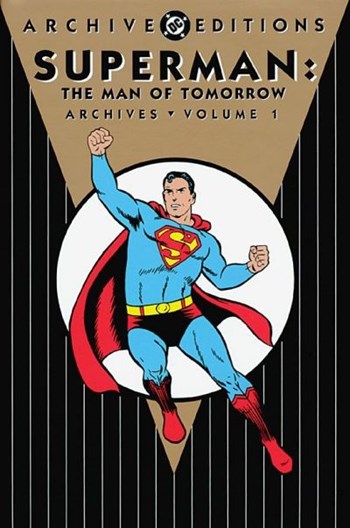 The cover art is a detail from the cover of Action Comics #242. 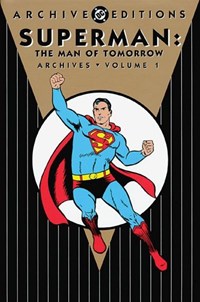 Some story credits in the Table of Contents are erroneous. The illustration is from p. 8, panel 6 of "Superman in the White House!" from Superman (DC, 1939 series) #122.

The key and doorway to the Fortress of Solitude are depicted differently on the cover of Action Comics #241, pencilled by Curt Swan, from how they appear in the story, pencilled by Wayne Boring. On the cover the key is a giant skeleton key and below the doorway "FORT SUPERMAN" is written on the face of the mountain, while in the story the key is arrow-shaped, disguised as a marker to guide planes, and there is nothing written below the doorway. It is the arrow-shaped key and unlabeled doorway in the story drawn by Boring that will become the canonical versions.

Someone has broken into Superman's Fortress of Solitude, so Superman searches the place for clues.

7 The Secret of the Space Souvenirs (Superman) Comic story, 8 pages

Superman is compelled to collect trophies from space, but doesn't know why.

When Jimmy is knocked out, he dreams of what it would be like if Superman were president of the United States.

While testing a new device, Superman accidentally gives Private Jones super-powers. Superman uses the soldier, who is promoted to sergeant, to make a pair of foreign spies think that he can create an army of American super-soldiers.

Brainiac's appearance on the cover of Action Comics #242, pencilled by Curt Swan, is different from that in the story, drawn by Al Plastino. Along with differences in the costume, on the cover Brainiac has electrodes on his head while in the story he doesn't have electrodes. It is Curt Swan's Brainiac with the electrode-studded head that will become the canonical version.

While Clark Kent and Lois Lane are passengers on an experimental rocket, the rocket is snagged by the alien Brainiac. Clark switches to Superman, but can't penetrate Brainiac's force shield, so moves the rocket out of the control of Brainiac's ship. Brainiac turns to his primary goal, which is to shrink and bottle the great cities of Earth in order to restore them to normal size and repopulate his own planet, whose native people have all been wiped out by a plague. Superman returns to Metropolis, expecting Brainiac to also snatch that city, and through that gain entrance into Brainiac's ship. Once inside, he finds a bottle with a shrunken Kryptonian city. He enters the bottle, but loses his powers under its artificial gravity. There he seeks the help of a scientist who helps him plan a way to restore the cities of Earth while Brainiac lies in suspended animation for the trip back to his own planet. But unfortunately there isn't enough power to restore Kandor, so Superman places it in his Fortress until he can find a way, as Brainiac's ship rockets away, with Brainiac unaware that he is returning home empty-handed.

Brainiac's depiction in this story differs from that on the cover (see note to previous sequence). The cover version of Brainiac would become the canonical version.

This cover is a recreation. It is not a reprint of the original drawing.

Part 1 of 3. The Super-Girl in this story appears 11 months before Superman's cousin, Kara Zor-El, the Supergirl who debuts in Action Comics #252 (May '59). In the Table of Contents the pencils are incorrectly credited to Wayne Boring. The pencils are credited to Dick Sprang in the GCD's index of Superman (1939 series) #123 and in previous reprints of this story, including The Greatest Superman Stories Ever Told and Supergirl Archives Vol. 1. Although credited to Jamison, the coloring appears to be the same as in a previous reprinting of this story in Supergirl Archives Vol. 1, which was colored by Lee Loughridge.

Part 2 of 3. In the Table of Contents the pencils are incorrectly credited to Wayne Boring. Also, the coloring may in fact be by Lee Loughridge. See notes to previous sequence regarding disputed credits.

Part 3 of 3. In the Table of Contents the pencils are incorrectly credited to Wayne Boring. Also, the coloring may in fact be by Lee Loughridge. See notes to sequence 13 regarding disputed credits.

16 The Lady and the Lion! (Superman) Cover reprint (on interior page), 1 page

17 The Lady and the Lion (Superman) Comic story, 12 pages

Circe gives Superman a potion that causes him to have the head of a lion until he discovers the antidote.

2nd appearances of Fortress of Solitude and Bottled City of Kandor. The Fortress is depicted the same as in the story from Action Comics #241, also pencilled by Boring.

After Superman releases the Black Knight from a block of ice after nearly 1,000 years, the villain goes on a crime spree. When the knight wounds Superman with his magical sword, criminal "Bull" Mathews offers to buy it, but finds it was all a set-up to trap him.

When Clark and Lois are trapped on a remote island, Clark reveals his double identity to Lois and proposes marriage. But when he discovers that he can leave the island, Clark must convince Lois he faked the super-feats he performed on the island in order to get out of the engagement.

With its Schaffenberger art and focus on Lois Lane's relationship with Superman, this story is similar to those that appear in the pages of Superman's Girl Friend, Lois Lane.

23 The Super-Merman of the Sea (Superman) Comic story, 12 pages

Superman pretends to join forces with underwater-dwelling aliens in order to trick them into believing Earth's seas are too salty for them.

When Lois visits Superman's Fortress, she accidentally releases the criminal Zak-Kul from Kandor. The villain traps Superman in Kandor and takes over his life until Superman escapes and returns Zak-Kul to the bottle city.

Early appearances of Kandor and the Fortress of Solitude. The Fortress is depicted the same as in the story from Action Comics #241, also pencilled by Boring. Writer id by Bob Hughes.

Lois dreams she and Clark gain super-powers and become Power-Girl and Power-Man.

With its Schaffenberger art and focus on Lois Lane's relationship with Superman, this story is similar to those that appear in the pages of Superman's Girl Friend, Lois Lane.

Superman recalls his college days, particularly the professor who tried to scientifically prove that Clark Kent was Superboy.

1st of a series of "Untold Tales of Superman". Reveals the circumstances which led to Superboy choosing to call himself Superman.

When Superman is exposed to the radiation from the explosion of an alien space ship, he loses his powers but gains the ability to create a miniature version of himself with his powers to carry out his super-duties.

The scene on the cover of Action Comics #246, of an Earth couple sending their infant son to another planet in a rocket resembling the one that sent baby Kal-El to Earth, does not appear in the story, which is about a crook who builds a Krypton-themed amusement park.

Real estate promoter Jonas Smith creates the planned community of Krypton Island, which opens with a pageant featuring a re-enactment of Jor-El and Lara sending Baby Kal-El to Earth. But Superman realizes Smith is a wanted criminal and stops him from smuggling off Krypton Island diamonds that Superman made from coal.

The Table of Contents incorrectly credits Curt Swan as the penciller, but the visual style is unmistakably that of Wayne Boring (the GCD's index of Action Comics #246 also credits Boring). Writer id by Bob Hughes.

Ma and Pa Kent seemingly arrive in the present in a time bubble, and Superman is so happy to see them that he shows them all the secrets of his adult life. But Ma and Pa turn out to be con artists who blackmail Superman with the knowledge of his double identity secret.

Early appearance of Fortress of Solitude. The Fortress key is a giant skeleton key, as shown on Curt Swan's cover of Action Comics #241 (the NON-canonical version).

When Superman loses his memory, he adopts the persona of Clarence Kelvin and takes a job at the Daily Planet while he tries remember his true identity.

36 The Spell of the Shandu Clock (Superman) Comic story, 8 pages

Superman pretends to be under the influence of a mystical clock in order to make the Fallon Gang think he is helpless against their new weapon.

When Superman sees Lois get out of a date by making herself look ridiculous, he changes his appearance to teach her a lesson.

Superman wears a mask that resembles Mad Magazine's Alfred E. Neuman. With its Schaffenberger art and focus on Lois Lane's relationship with Superman, this story is similar to those that appear in the pages of Superman's Girl Friend, Lois Lane.

The cover art is a detail from the cover of Action Comics #242.