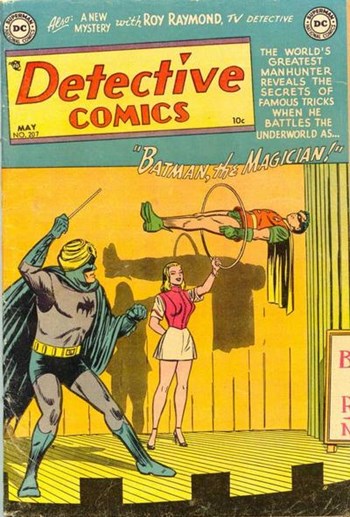 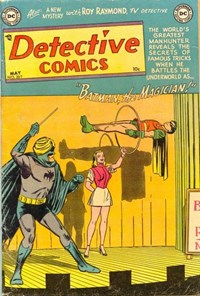 The great magician Merko is kidnapped by a gang "Boss", wanting him to find a way to remove a pair of handcuffs from his wrists that were put on him by a rival gang and which supposed contain explosives. Batman and Robin substitute for Merko and his assistant on stage until they get a lead to the whereabouts of Merko, and can save him.

Note from Anthony Tollin: Will Murray and I both believe that the 1954 "Batman the Magician" story in Detective Comics #207 is scripted by Gibson. Stylistically, it has the structure and parallel storylines common to his novels that were not usually found in Finger's scripts ... and it also shows a familiarity with real stage magic illusions that makes me suspect that this was one of the half-dozen Batman stories scripted by Gibson around that time. (The scriptwriter also clearly indicates that Batman has found his own, different ways of performing the illusions other than the ones regularly used by stage magicians ... which also makes me suspect that this was written by a real magician who did not want to explain/ruin the actual gimmicks performed by his fellow illusionists.) Also, even though editor Mort Weisinger was notorious for giving one writer's plots to another writer, I would think that he would want to have a story about stage magic written by the best writer to do it ... the real magician and former manager of the huge Blackstone touring show. I doubt if the person who ID'd the story as being by Finger was considering Gibson as a possibility.

"I'm afraid of wild animals in these woods..."

"I'll play out in the field, fellows!"

"Why was the White House in Washington painted white?"

12 Editorial Advisory Board Promo (ad from the publisher), 0.5 pages

14 The Line of Stars Presents (Tomahawk) Promo (ad from the publisher), 1 page