Superman in the Seventies 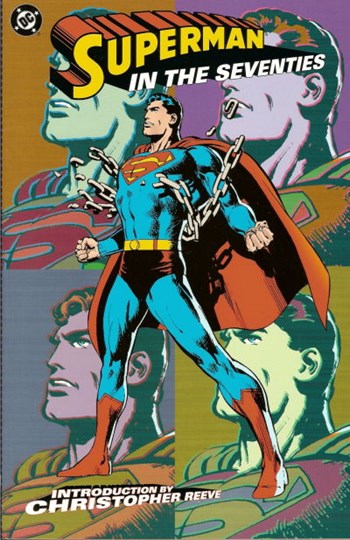 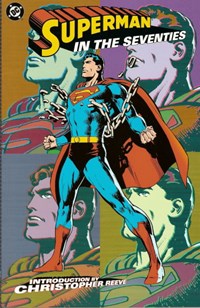 Willie Fawcett finds himself lost in Superman's universe and that whenever he changes into his super-powered alter ego of Captain Thunder he becomes evil. Superman helps him figure out the way to return ot his universe and shake the evil influence of the Monster League of Evil.

Superman is surprised by an attack from Superboy. When Superboy binds Superman and puts him on trial before his own friends, he reveals that he is actually Pete Ross who has used both a time-travelling machine and a mind-transfer machine he found in one of Luthor's lairs to draw Superboy into the future and switch minds with him. Pete accuses Superman of allowing his son Jon to be taken by aliens. When the jury refuses to convict Superman on this charge, Pete prepares to execute him. But back in Smallville, Superboy, in Pete's body, has broken loose and summoned Krypto. Krypto attacks Pete and frees Superman. Pete and Superboy are restored to their proper bodies and Superman resolves to help Pete recover.

8 The Man Who Murdered the Earth (Superman) Comic story, 18 pages

As WGBS employess picket outside the building, they witness a mirror image of the Metorpolis skyline descending from the sky. When Superman investigates, he finds Brainiac, who announces that when the mirror image meets the real skyline, the latter will explode. With the aid of WGBS, Superman convinces Brainiac that his plot has succeeded and that he is mad with rage. With the advantage of his sanity and Brainiac's misunderstanding of the situation, Superman is able to turn the tables on Brainiac and send him off into deep space.

The appearance of a stagecoach on the streets of Metropolis heralds the arrival of Terra-Man, a character seemingly from a spaghetti western, yet with super-scientific weapons. Superman must contain Terra-Man while dealing with a kryptonian condition known as birth-spells which effects the metabolism of Kryptonians every six years on their Kryptonian birthdays.

Story includes pastiches of Archie and Edith Bunker from TV's All in the Family.

At the Superman Museum, The Parasite intentionally bumps into Lex Luthor in order to steal his voice and command ability. When Superman is knocked down by Luthor's weapons under the control of The Parasite, Luthor transfers Superman's life-force into the Superman statue made from an asteroid that sits outside the museum. The statue knocks The Parasite out of his hovercraft and catches him. When the Parasite tries to drain the powers of the statue, The Parasite's power is drained instead.

Jimmy Olsen's new boss Morgan Edge assigns Jimmy to do a story on the Newsboy Legion and their Whiz Wagon which leads him to the mysteries of the Wild Area and the Outsiders and their leader Yango. Jimmy is joined there by Superman, after he survives an assassination attempt on Clark Kent by Inter-Gang, directed by Morgan Edge.

Most Superman heads are redrawn by Al Plastino.

In order to do a story on the African-American community in Metorpolis, Lois uses a Kryptonian machine to make herself appear African-American. Thus disguised she enters the community and shares some of its everyday experiences with a woman in a tenement slum and an activist on the streets.

16 Who Was That Dog I Saw You with Last Night? (Superman) Comic story, 13 pages

While Superman and Lois enjoy a date, Krypto, who has lost his memories, encounters a dog named Chelsea. When Lois passes out, Superman takes her to a hospital and is spied by Krypto, whose memories flood back. Superman and Krypto trace the gas that knocked out Lois to a gang of thieves using blue smoke-bombs to cover their robberies. When they put a stop to the gang, Lois reaffirms her love for Superman, but Chelsea is not as comfortable with a super-powered suitor.

Superman From the Thirties to the Seventies (Crown, 1971 series) (1971) — Superman Breaks Loose

A scientific experiment turns all the kryptonite on Earth to iron, as Clark Kent moves from newspaper to television journalism.

19 Must There Be a Superman? (Superman) Comic story, 17 pages

The Guardians of the Universe tell Superman that his actions may be impeding the progress of the human race. While Superman considers what they said, he gets involved in the problems in a migrant camp.

When the plans for a new highway go right through the Kent home in Smallville, Clark returns for one last visit. Pete Ross sees Clark and recalls how he recommended the highway be put through the Kent home to destroy any remaining evidence of Clark's double identity there. But once he meets up with Clark and realizes Clark has taken care of the evidence and wishes to keep his childhood home, he regrets the decision. Clark leads Pete to "discover" Native American artifacts near the Kent property, which necessitates diverting the highway and saves the Kent home.

On Earth-2 in the 1950's, Colonel Future teams with The Wizard to make Superman cease to exist. Clark Kent, with no memory of his career as Superman, continues the fight against crime as a crusading reporter. His new-found boldness attracts the attention of Lois, and they marry. But it also attracts the attention of Captain Future's gang, and they try to eliminate him. When Clark doesn't even realize an attempt has been made on his life, Lois begins to suspect again that he is Superman. She seeks out the Wizard, who though now living as a bum, had previously claimed to be responsible for Superman's disappearance. The Wizard restores Superman, who sends The Wizard's wand into space, resumes his career as Superman, and re-affirms his marriage vows with Lois in a Kryptonian ceremony at his secret citadel in the mountains near Metropolis.

Colonel Future is named after writer Edmond Hamilton and in tribute to the pulp character he wrote, Captain Future.