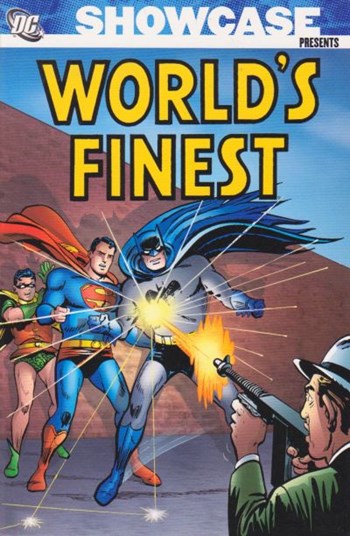 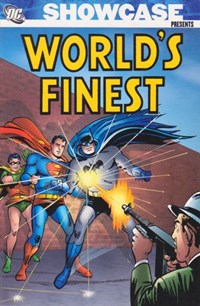 5 The Mightiest Team in the World! (Superman) Comic story, 12 pages

Superman and Batman learn each other's secret i.d.'s when they meet on a cruise while trying to find a diamond thief.

Lois accidentally learns Superman's identity while he is trying to rescue Batman and Robin, so Clark Kent and Bruce Wayne exchange roles to convince Lois that Clark is not Superman.

Pencil/Ink credits on this cover are a matter of some debate. Agreement is that everything except the Superman/Batman and Robin characters are by Swan/Kaye. There is some doubt about the Superman/Batman and Robin characters as possibly being by Win Mortimer. Win Mortimer denies having any part of this cover in a conversation with Craig Delich, so if those are Win Mortimer figures they were most likely added by paste-ups from the production department and not drawn by Win Mortimer specifically for this cover. [Mike Nielsen - From a discussion on the GCD email list]

Superman and Batman must find out who has been supplying weapons to the Heavy-Weapons Gang.

Batman poses as a Swami in a circus to lure out a superstitious criminal, and Superman helps him by making his predictions come true.

13 The Contest of Heroes (Superman and Batman) Comic story, 10 pages

An automated rocket returns a shape-shifting alien to Earth where it wants to play games with Superman and Batman.

Batman and Superman have a contest to do the most civic good deeds during a 24 hour period. An electronics convention will be held in the city of the winner.

Someone has been announcing that Clark Kent is Superman and challenging Superman to prove it false. Superman asks Batman and Robin to help him find the culprit.

Batman and Robin are sent into the past by Dr. Nichols, but he is unable to return them to the present. He calls upon Superman to help him, so Superman travels to the past to meet Batman and Robin. Together, they help Aladdin by having Superman pose as the genii in Aladdin's lamp.

Perry White sends Clark and Lois to Gotham to help save the Gotham Gazette. Superman and Batman try to find out what crime story editor John Hall was working on before he was hospitalized.

Clark, Bruce and Dick are sent into the past by Dr. Nichols to discover the identity of the Man in the Iron Mask.

This volume incorrectly credits the cover pencils to Curt Swan. Dick Sprang has confirmed his pencils on this volume.

31 The Case of the Mother Goose Mystery (Superman and Batman) Comic story, 12 pages

Mystery Inc has set up a mystery for three high-paying clients so they can pretend to be Batman, Robin and Superman. A mix-up of dates causes the real superheroes to assume the parts that were to be played by the clients, and stop a real robbery in the process.

33 The Super-Mystery of Metropolis! (Superman and Batman) Comic story, 12 pages

Superman believes that Thad Linnis knows his secret identity, so when Thad demands he leave Metropolis, Superman does. Superman reveals to Batman and Robin a tale of his youth in Smallville, and discovers that the young boy that he thinks may have discovered his identity was actually a young Bruce Wayne.

1st meeting of Bruce Wayne and Clark Kent in Smallville.

When Princess Varina comes to America, Batman and Superman seem to both have fallen in love with her and fight for her attention.

Superman, Batman and Robin are putting on a show for charity, but someone keeps sabotaging the performance.

Lex Luthor and Joker go into business together making Mechano-Men, near indestructible robots. Superman and Batman believe they have not gone straight and try to figure out their master plan.

43 The Club of Heroes (Superman and Batman) Comic story, 12 pages

John Mayhew brings the Club of Heroes together and will give them a headquarters, but they must select a chairman for the club. The Heroes decide that the hero who performs the most good deeds will become chairman.

Batwoman takes a capsule created by Jor-El that gives her super powers for 24 hours. She uses that time to try to find out Batman and Superman's secret identities.

The capsule that Batwoman takes was hidden by Elton Craig during the events of World's Finest Comics (DC, 1941 series) #87's story "The Reversed Heroes".

As Supermna, Batman & Robin chase a wanted felon into a cave, they are unaware that a trap awaits them.....and when they awake, they find themselves 1000 years in the future, having to fight a descendant of Luthor!

A mysterious boy with Super-powers crash lands on Earth. Superman takes him in, but Batman suspects he's a criminal.

51 The Boss of Batman and Superman! (Superman and Batman) Comic story, 12 pages

The Greatest Batman Stories Ever Told (DC, 1988 series) ([November] 1988) — The Origin of the Superman-Batman Team

The Greatest Batman Stories Ever Told (Warner Books, 1989 series) ([June] 1989) — The Origin of the Superman-Batman Team

Origin of the Superman-Batman Team.

The version printed here is heavily altered from the original. Batman's cape, and the shadow underneath Batman have been altered. Robin's shoulders and cape are almost non-existent in this version. Superman's left hand has been redrawn, originally it was in a fist, now his fingers are extended. Also, the cover title has been re-lettered with an extra 's' added to the end, causing this version to be mis-spelled as "Battle of the Super-Heroess!". These changed may have been first done for the World's Finest Archive volume, but that needs confirmation.

55 The Battle of the Super-Heroes (Superman and Batman) Comic story, 12 pages

Alien gamblers give Batman super-powers as part of a bet.

Aliens from another planet have used robots for so long that they have forgotten how to think and work for themselves. When their robots begin to deactivate, they test Superman, Batman and Robin against natural threats on their planet so they can see how to defeat those same menaces themselves.

The Condor Gang frames Batman for taking a bribe to let a criminal escape. Superman is forced to arrest Batman and Robin and then spends his time trying to prove their innocence, giving the Condor Gang a chance to start a crime spree.

61 The Menace of the Moonman (Superman and Batman) Comic story, 12 pages

While orbiting the moon, a strange comet crosses paths with Pilot Rogers rocket. When he returns to Earth he discovers that whenever moonlight strikes him he becomes the evil MoonMan.

Batman announces he is going to spend a million dollars. When his purchases turn out to be busts, Superman secretly makes them profitable, against Batman's wishes.

Luthor shrinks himself and tricks Superman into leaving him in the Fortress, where he enters Krypton City [Kandor] and takes over.

67 The Menace of the Atom-Master (Superman and Batman) Comic story, 12 pages

The Atom-Master has developed the means to create giant illusions which begin to panic Metropolis and Gotham City, distracting Superman and Batman. Meanwhile, his men are able to steal enough to give him the funds to improve his machine so that he can create physical objects with his thoughts.

69 The Caveman From Krypton (Superman and Batman) Comic story, 12 pages

A meteor crashes in the country and a caveman from ancient Krypton emerges. Pete and his boss Jo-Jo try to use the caveman's powers to help them steal from banks, but are stopped by Superman, Batman and Robin.

71 The Secret of the Sorcerer's Treasure (Superman and Batman) Comic story, 12 pages

Atkins and Bork purchase a map that leads them to an ancient sorcerer's weapons.

Superman, Batman, Batwoman and Robin are scheduled to display crime-fighting inventions of the future at an exhibit of what future Gotham will be like. Lex Luthor, disguised as an inventor of one of the inventions, tries to have Superman disintegrated.

Superman suddenly spins a cocoon around himself and then emerges as an alien version of himself, with no memories of his past.

The Duplicate Man can split into two copies of himself, allowing him to rob to locations at once. If one version is caught, it can be recalled by the other version, thus avoiding capture. Until Superman and Batman come up with a plan to stop him.

On page 9, the last panel, the art on the figures of Batman & Robin appears to be that of Sheldon Moldoff alone....NO Dick Sprang. Showcase volume credits Charles Paris for inks.

While Superman battles a flaming monster in the present, Batman and Robin, courtesy of Prof. Nichols time machine, venture to the past to find an alien device left as a defense against the creature.

An alien movie producer captures two criminals, Beaver and Midge, in order to lure Superman, Batman, and Robin to an uninhabited area to film his movie. One by one, he throws bizarre alien creatures into the mix for the purposes of his film. But troubles start when the criminals escape and decide to use the alien's gadgets for themselves. Fortunately, the World's Finest team is able to capture the criminals, and a regretful alien promises to never mess with other people's destinies again.

While in England attending a convention, Batman stumbles into an ancient cave's "booby trap" set up years before by a sorcerer named Fangan. Robin appeals to Superman for help, as Batman believes that if he doesn't carry out Fangan's commands, he will perish.

An alien arrives on Earth and starts shrinking buildings and stealing them. He plans to enlarge them on his homeworld and create a tourist attraction in space. Superman, Batman and Robin must stop him and return the shrunken buildings to their proper locations.

The force of a volcanic eruption gives Superman amnesia. He finds himself in a forgotten Aztec city and becomes the king of the inhabitants. When Batman and Robin go in search of him, they find the criminal Floyd Frisby who tries to convince Superman that Batman and Robin are really criminals.