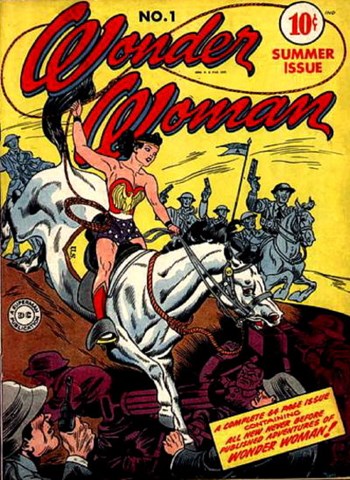 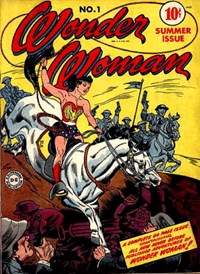 inside front cover; photos and text on Alice Marble and Helen Wainwright Sterling

The Gods behind the epithet, "Beautiful as Aphrodite, Wise as Athena, Strong as Hercules and Swift as Mercury," are visually and in text introduced to the reader.

Upon her arrival in man's world, Wonder Woman drops an Amazon scroll that details the origin and early days of the Amazons, while later sources outline her birth, her youth, and her battle in the arena for the right to be Wonder Woman.

Story title from reprints. Wonder Woman's origin from All-Star Comics (DC, 1940 series) #8 is shown with more detail, including the creation of the Amazons from clay by Aphrodite, and Diana's birth on Paradise Island: sculpted from clay by Hippolyte's hand under the direction of Athena, and brought to life by Aphrodite. Wonder Woman is shown here to receive her magic lasso along with her costume after winning the contest, whereas she originally received her lasso after having lived in man's world for a time, as shown in Sensation Comics (DC, 1942 series) #6. Captain Trevor is promoted to Major.

4 No title recorded (All-Flash) Promo (ad from the publisher), 0.5 pages

Wonder Woman brings children to King's Colossal Circus, performs in the big ring, and with the help of Etta and Steve, investigates a rash of elephant deaths by poisoning which threaten to close the circus.

The story of Florence Nightingale (1820-1910) who sacrificed personal happiness to nurse soldiers on the Crimean War front and throughout her life.

Suspecting Paula von Gunther of leaking military secrets, Diana and Steve visit her in prison, where Paula is aided in her subterfuge when the magic lasso accidentally falls into her hands.

Story title from reprints. Reprint note from Error Report by Darci. The image of Wonder Woman riding a horse on the splash page was used for the cover. Mabel is shown reading an issue of Sensation Comics. This story was the basis for an episode of the Wonder Woman TV series, "Wonder Woman Meets Baroness Von Gunther." Paula is shot and killed at story's end, although she's alive in her next appearance, Sensation Comics (DC, 1942 series) #12, because an "electric machine she invented brought her back to life."

Phillip's invention, a miraculous combination compressed air and water suction valve, is stolen and he and his brother believe the Nazis had stolen it to use on their U-Boats.

Writer credit by Craig Delich, confirmed by the Who's Who.

"Can anybody tell me why we bought this danged hotel?"

Adeline's father buys a hotel. When the hotel's tenants complain that the water tastes like oil, he hires an oil expert to see if there is oil on the property.

12 Another Big Issue of All-Star (All-Star Comics) Promo (ad from the publisher), 0.5 pages

When Etta's brother is attacked by spies, Wonder Woman and Etta trail them from Texas to Mexico City, where Wonder Woman fights a bullfight and stops a secret Japanese invasion of Mexico.

Wonder Woman crashes a car into a tree to avoid hitting Etta, seemingly killing the other passengers, noting they were "too lazy to jump in time." Instead of using the magic lasso, Wonder Woman hypnotizes Mint to determine what he revealed to the Mexican spies.

15 Editorial Advisory Board Promo (ad from the publisher), 0.33 pages

Book review of book by Lydia Mead with drawings by Oscar Fabres.

Also includes a "Superman's Secret Message" (in code Pluto No. 8).

"A special message to the boys and girls of America from Henry Morgenthau, Jr. - Secretary of the Treasury!"

The publishers donated this space, on behalf of the U.S. Savings Bonds and War Stamps campaign, to published a letter from the Secretary of the Treasury, Henry Morgenthau, Jr., encouraging the boys and girls of America to buy at least one 10 cent Savings Stamp each week to help the war effort.

The on-sale date is the publication date reported in the U. S. Copyright Office filing. On-sale date of July 22 given in Green Lantern #4.